Dana White was clearly impressed with Colby Covington's win over Robbie Lawler this past weekend.

Prior to UFC Newark, Dana White reported that if Colby Covington beat Robbie Lawler, “Chaos” would be next for welterweight champ, Kamaru Usman. Well, if you still weren’t sold that Covington will indeed, challenge for the belt next, you should be after reading White’s comments below. 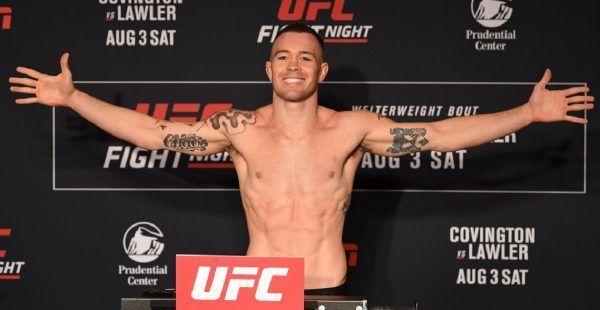 Recently there had been a ton of speculation, regarding who would be the first to face the new champ, Usman. Heading into UFC 239, the consensus was that the winner of the Jorge Masvidal – Ben Askren fight could leapfrog past Covington, since the latter hadn’t fought since last summer.

Well, due to Masdvidal’s jaw-dropping, record fast KO of Askren, many believed he was the front runner for a title shot. As noted above, White came out prior to UFC Newark and said Covington would indeed, lock up a title shot if he beat Lawler. But, since history tells us title shot guarantees, aren’t always in fact, guarantees, (Covington was told he’d fight for the belt next earlier this year), even “Chaos” had doubts.

Well, following Covington’s one-sided, decision win over Lawler on Saturday (which saw Covington scored 10 takedowns and outstrike Lawler by a 201 – 82 margin), White’s reportedly confirmed “Chaos” is getting a title shot.

While discussing Covington’s win over Lawler, the UFC President had this to say (quotes via MMA Junkie):

“That’s why I put Covington on ESPN against a guy like Lawler,” White said while talking to the media on Tuesday. “You can say whatever you want about Covington. You don’t like him, you don’t this, that, whatever. He put on a clinic against Lawler, who is a beast.

“Lawler’s been in all the big fights, former world champion, hits like a truck and Colby completely shut him down. His cardio was impressive, and the way that he beat Lawler was even more impressive.”

Yup. Even if you’re one of the folks who believes Lawler’s best days are behind him, and that Covington was a bad match-up for him, in terms of his wrestling abilities, it’s hard to deny Colby’s performance wasn’t impressive on some level. Lawler is one of the most rugged, determined and dangerous welterweights on the roster, even at the age of 37.

Case in point, in the opening moments of his bout with Askren this past March, it looked like “Ruthless” was going to hand the decorated wrestler his first defeat. The former champ also isn’t far removed from a win over Donald Cerrone.

Now it remains to be seen when Usman – Covington takes place. As it stands right now, October or November seems most likely.