Earlier this year, former UFC champion Conor McGregor entered an Ireland bar and threw a left-hand at a male who refused to take a shot.

Former UFC featherweight and lightweight champion Conor McGregor has not had an official fight since last year when he was bested by Khabib Nurmagomedov for the title.

But, that does not mean McGregor has kept his hands to himself in public.

TMZ reported that back in April, “Notorious” struck an elderly man inside a Dublin, Ireland bar after he refused to take a shot with him. McGregor had entered The Marble Arch Pub and ordered shots of his whiskey for all to take with him. 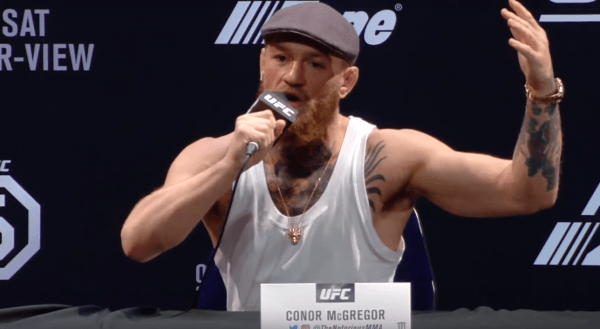 When the person declined several times, McGregor uncorked with a left to his face. He was immediately removed from the bar by two people. Related: UFC 241 Primer: Nate Diaz Vs. Conor McGregor 1

Have Charges Been Filed Against Conor McGregor?

Authorities in Ireland were called and an investigation started, but to date, no charges have been filed against McGregor in regards to the incident, which was all caught on tape. Related: Dana White On UFC 238, Conor McGregor, ESPN

In a recent interview, UFC president Dana White claimed that McGregor could be in line for a fight with the winner of Nurmagomedov vs. Dustin Poirier. Those two meet for the undisputed lightweight title later this year.