Along with the grand prix final and title fight between MacDonald and Lima, Frank Mir and Roy Nelson square off in another main event.

On October 25 and 26, Bellator returns to Mohegan Sun Arena in Uncasville, Conn. for two back-to-back nights of exciting MMA action.

On Friday, a heavyweight battle between former two-time UFC heavyweight champion Frank Mir (18-13) and the always-tough Roy Nelson (23-17), while Saturday’s show will see the long-awaited championship rematch between Rory MacDonald (21-5-1) and Douglas Lima (31-7) in the Finals of the Bellator Welterweight World Grand Prix with one million dollars on the line.

Bellator 231: Mir vs. Nelson will be broadcast Friday, October 25 on Paramount Network at 9 p.m. ET/8 p.m. CT and will simulcast on DAZN.

Bellator 232: MacDonald vs. Lima 2 will stream exclusively on DAZN on Saturday, October 26 at 10 p.m. ET/7 p.m. PT. Preliminary action for both events will stream on DAZN, Bellator.com and globally on the Bellator Mobile App. Additional bouts will be announced in coming weeks. Related: Bellator 225 Results

Fighting out of Las Vegas, Mir is set to enter the Bellator cage for the third time in his illustrious 18-year career when he runs it back with “Big Country” on Oct. 25. Following a 15-year run in the UFC, highlighted by 16 promotional wins and a pair of heavyweight world titles, the Brazilian jiu-jitsu black belt now looks for a marquee victory inside the Bellator cage.

In addition to his championship belts, Mir also tallied notable victories over Brock Lesnar, Antonio “Bigfoot” Silva, Antonio Rodrigo Nogueira (twice), as well his upcoming opponent Roy Nelson a little over eight years ago. With 14 of his 18 career wins coming by way of knockout or submission, Mir hopes to replicate his success over Nelson with yet another finish inside Mohegan Sun Arena. “Big Country” will be returning to the Bellator cage for the second time this year and for the fifth time overall, when he faces Mir in a long-awaited rematch that stems from a unanimous decision defeat back in 2011.

At 43-years-old, the 40-fight veteran has collected many notable victories over the course of his 15-year career, including highlight reel knockouts over Antonio Nogueira, Antonio “Bigfoot” Silva, Mirko Cro Cop, Cheick Kongo, Brendan Schaub and Matt Mitrione. With 19 career appearances in the UFC, emphasized by his victorious run on “The Ultimate Fighter” season 10, the Brazilian Jiu-Jitsu black belt is looking to make another run at Bellator’s heavyweight strap. 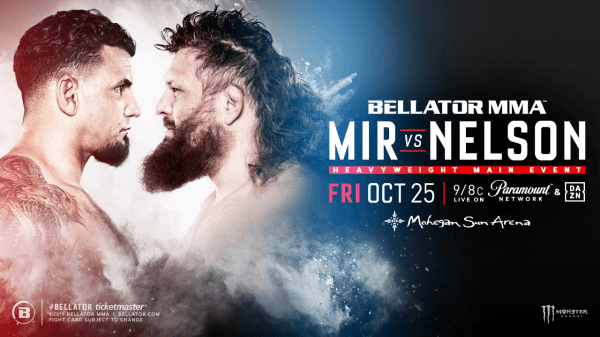 Splitting time between Kelowna, British Columbia and Montreal, Canada, MacDonald will be entering the Bellator cage for the sixth time, in search of his fourth promotional victory and second over the surging Lima. The last time the two met inside the cage, the 30-year-old Tristar Gym product emerged victorious in a 25-minute war and “Fight of the Year” candidate that resulted in a unanimous decision win for the welterweight title.

Since then, MacDonald competed for the middleweight world championship against Gegard Mousasi and successfully defended his welterweight strap twice en route to the Welterweight World Grand Prix Finals. Following a pair of five-round battles with Jon Fitch at Bellator 220, and most recently Neiman Gracie at Bellator 222, the “Red King” will look to once again protect his 170-pound strap and take home the one-million-dollar tournament prize when he faces Lima on Oct. 26.

Hailing from Goiania, Brazil and now fighting out of Atlanta, Georgia, the 31-year-old Lima will be competing in the main event of Bellator 232, a Welterweight World Grand Prix final with two belts and a one-million-dollar prize on the line. Since making his promotional debut in 2011, “The Phenom” has earned 13 victories, including a pair of world titles and 10 finishes.

The American Top Team product has won five of his last six and 10 of his last 12 contests, making him one of the most dominant fighters in the 170-pound class. With 26 of his 31 career victories coming by way of knockout or submission, including consecutive finishes over Andrey Koreshkov and Michael “Venom” Page” in the first two rounds of the tournament, Lima will attempt to add to his streak and put an early end to MacDonald’s night inside the Mohegan Sun Arena on Oct. 26.