Cris "Cyborg" has repeatedly insisted that she wants to fight Amanda Nunes again, and in a new video that's been posted, the star can be seen confronting Dana White about it.

Leading up to UFC 240, Dana White opined that Cris “Cyborg” isn’t interested in facing Amanda Nunes again, and that the former champ could be looking for easy fights moving forward. “”Cyborg” has repeatedly denied that’s the case, and after her recent win, she confronted White about it. 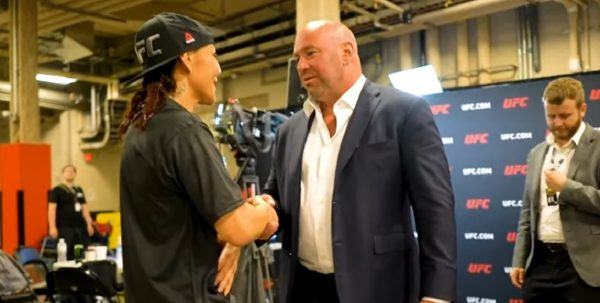 Recently “Cyborg’s” team posted the video below, which documents the Brazilian telling White to “stop lying” about the Nunes rematch. The footage was shot not long after “Cyborg” worked her way to a decision win over Felicia Spencer at UFC 240.

Since the event, “Cyborg” has also accused White of bullying her, adding fuel to the speculation that her time with the UFC is done. The win over Spencer was the final fight of “Cyborg’s” UFC deal.

Nunes and “Cyborg” fought for the first time last December, and the latter was quickly stopped in round one.