Henry Cejudo vs. Urijah Faber? Latter Says Next Would Work

Urijah Faber was one of the fighters Henry Cejudo called out after becoming a champ-champ, and "The California Kid" is up for the challenge.

Urijah Faber has some work to do first – namely get by Ricky Simon tonight at UFC Sacramento, but “The California Kid” is very interested in fighting Henry Cejudo next. 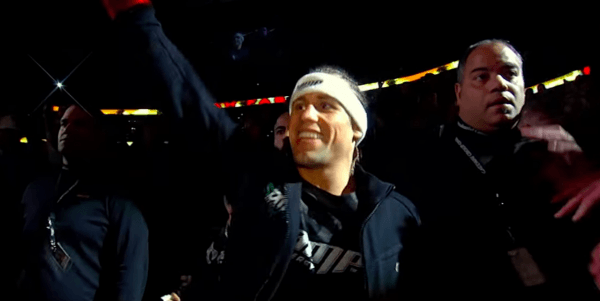 After Cejudo secured the bantamweight title last month, Faber was one of the names the champ-champ called out. Well, in advance of Faber’s fight tonight against Simon, the formerly retired fighter was asked about Cejudo’s callout. Is the Sacramento star interested (quotes via MMA Fighting)?

“Absolutely, I’ll never rule that out,” Faber said. “Henry just called me out, the current champ at two different weight classes and an Olympic gold medalist. So that’s an enticing fight for me because of the matchup, and you know, the reason I’m in the sport. And the fact he threw me in the mix and we talked about it 10 years ago prior, which is kind of cool how that all played out. So that’s always in the back of my head, for sure.”

“There’s a video on YouTube of me where I’m interviewing Henry and introducing him to the world as the Olympic champ and his new shoe and that was 10 years ago. He was there talking shop about getting involved and everything else so we spent some time, and then at the end of it, he said, ‘What do you think about maybe you and me fighting some day,’ and I took it real serious, in a good way.”

“…I mean I can do it after this one. When I retired, the year I retired I fought for a world championship, I lost a decision to Dominick Cruz and I was ranked like number six in the world or something like that, so that’s how I retired, off a win. So that’s where my head has been at.

Now sure, the fact Faber’s interested in fighting Cejudo for the 135 crown isn’t a massive surprise. The backstory he provided here, however, is pretty interesting no? Would the UFC give Faber another shot at the belt? Following a win over Simon? You just never know right?

Faber’s bout tonight with Simon will mark the first time he’s fought since 2016, when he earned a decision win over Brad Pickett. The now 40-year-old retired after that bout, before announcing his return earlier this year.