Andrei Arlovski has repeatedly said he's not thinking about retiring anytime soon, and following his win at UFC Sacremento, he believes he hasseveral years left in the game.

Andrei Arlovski’s career has featured dramatic highs and lows, but it looks like “The Pitbull” hopes to reach Dan Henderson and Randy Couture territory, in terms of career length. 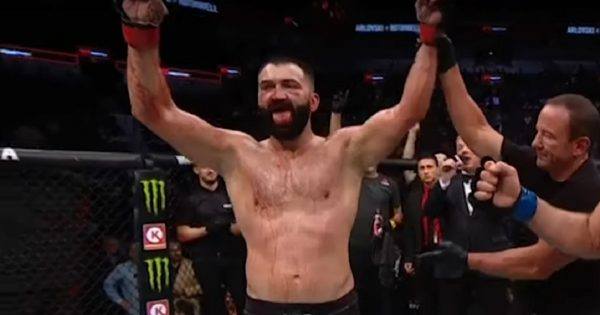 Before Arlovski fought Ben Rothwell at UFC Sacramento last weekend, the former UFC champ said he hopes to fight several more years yet. Well, since the 4o-year-old worked his way to a memorable, decision win over the game Rothwell, Arlovski told MMA Junkie this:

“I’m a lucky person, first of all. I have great coaches, I have a great team, a great facility and gym, American Top Team, where there’s a lot of heavyweights,” Arlovski said. “The most important thing for me, my wife, to get to do what I do, my passion, it’s my life. She supports me, she takes care of me and like I said, God willing, I want to fight until four, five years, maybe a little bit more. We’ll see.”

“I still have fire in my eyes, and I want to go, and I’m ready to go, but to be honest with you, I was really scared when we fought three rounds, and I heard that bell, and I said, ‘(Expletive), not again, judges,’” Arlovski said. “I was scared. It (expletive) me up a little bit, but coach Mike (Brown) started screaming don’t worry, you won the first two rounds, but Mike says I’m not sure about the third one but looks like you won two. But I was super scared to be honest with you.”

How about that huh? Now, since Arlovski has been fighting for 20 years, and because he has been stopped on multiple occasions, some will question whether he’ll be able to fight into his mid to late forties like Henderson and Couture did.

But, if there’s one thing we’ve learned about Arlovski over the years, he seems to have a knack for proving his detractors wrong. Not only has Arlovski ended another losing streak at UFC Sacramento, by defeating a well regarded heavyweight, he did so in pretty memorable fashion.