Daniel Cormier recently outlined why he believes Stipe Miocic's going to face an even more dangerous "DC" in the second scrap.

Daniel Cormier dropped jaws throughout MMA last summer by knocking out Stipe Miocic in the opening round at UFC 226. But, the heavyweight champ believes Miocic’s going to throw hands with an even better version of Cormier, when the fight later this summer. 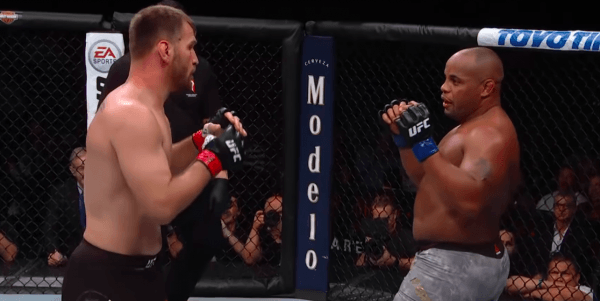 Miocic has been tapped for a rematch with Cormier, which will headline UFC 241, August 10th in Anaheim. While the former champ Miocic hasn’t competed since his loss to Cormier, “DC” defended the heavyweight title in November, by submitting Derrick Lewis. Cormier had intended to fight sooner, but the former light-heavyweight champ had to undergo back surgery, following his win over Lewis.

Well, while discussing the upcoming fight recently, Cormier had this to say (quote via MMA Junkie):

“Ultimately, it’s always about winning the fight,” Cormier said. “Get the job done, but if there’s any way to improve, then try to improve. I mean, can I find a submission? Can I find a way to take advantage of the same type of mistake that he may have made prior?

“…I anticipate being a better version of myself,” Cormier said, while talking about his recovery and how his back felt when he faced Miocic the first time. “In the fight last year, there were many days where I was lumbering into practice, barely able to stand tall and now I’m walking around straight, I feel good daily. Every day I feel better. I feel physically better so I’d imagine that would lead to better results.”

It’s going to be really interesting to see how Cormier looks, and how Miocic approaches him this time around. Chances are we won’t see a dramatically different Miocic, as far as his style. After all, Miocic is one of the greatest heavyweights to date. But, one would think Miocic’s going to be much more aware if and when he has to engage Cormier in the clinch.

One thing is for certain, however; if Cormier can go out and finish Miocic again, his case for being the greatest heavyweight of all time will receive a substantial boost. If Miocic wins, could we see a rubber match?