Scott Coker is hoping to have Rory MacDonald - Douglas Lima 2 go down in September, but the champ isn't on board.

After Bellator 222 finished up, Scott Coker reported that they’re planning to hold the finals for the welterweight grand prix in September. But, based off what Rory MacDonald said at the post-fight presser, that may not happen. 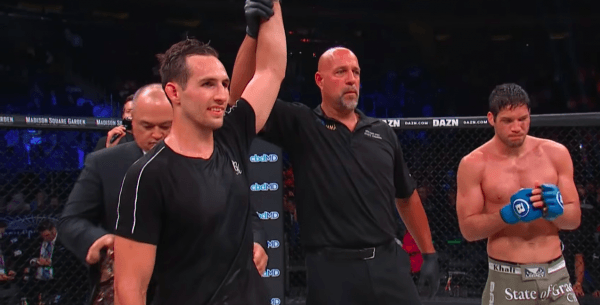 MacDonald advanced to the finals of the grand prix, and defended the welterweight crown last night, by earning a decision win over Neiman Gracie. The champ will take on Douglas Lima in the finals, who bombed out Michael Page last month in their semifinal.

Well, when MacDonald was asked about fighting Lima in September, the “Red King” said this (quotes via MMA Junkie):

“It’s unrealistic for me,” MacDonald said. “I wish I could make it come true. I had a feeling they would want that, but it’s just not possible with what’s going on in my life right now. I need to take some time to heal from these fights, from these training camps, so I can be ready for a guy like Douglas.”

“Doing that while just having a new child I think would be a little much stress-wise and organization, and it’s just too quick,” MacDonald said. “It’s too much of a rebound for me to take on a competitor like Douglas.”

So, it will be interesting to see what happens here. But, it certainly sounds like MacDonald’s not going to be ready to go in September. It also seems like the 29-year-old could be dealing with an injury. So, if that’s the case, Bellator won’t be able to move forward with their initial timeline. MacDonald said he’ll be ready to fight in November or December.

It should also be noted that MacDonald has fought three times now since September. So, if he were to fight Lima in September, it would mean four fights in a one year span, which isn’t too common these days with big stage champions.

MacDonald faced Lima for the first time in January, 2018, and won the bout via unanimous decision.