Donald Cerrone says he's ready to sign up for his next bout, after not being allowed out for the third round at UFC 238.

As it turns out, Donald Cerrone did not incur any broken bones at UFC 238 after all… 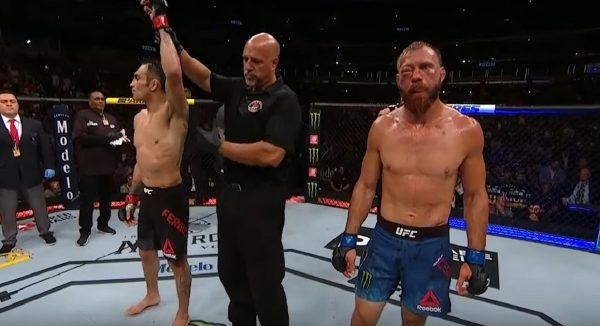 After absorbing more than a few punches in round two of his bout with Tony Ferguson, including one after the horn, Cerrone’s nose was bleeding badly. “Cowboy” made the mistake of blowing his nose, his right eye swelled shut, and the fight was stopped.

Well, after the bout there were reports that Cerrone had incurred a broken orbital bone in the fight. There was also talk that his nose could be broken too. But, more recently the fan favorite posted the good news below.

I’m in Good Health. Thanks for all the message and concerns. Only air was in my eye. No broken bones nor cracked or broken orbital. Sitting and waiting for the Rematch or next fight 🤠

So, with this news, it’s going to be really interesting to see what happens next. Could the UFC take a long look now at Cerrone – Ferguson 2? Would “El Cucuy” be on board?