Cris “Cyborg” Will be Talking With Other Promoters, Following UFC 240

Cris "Cyborg' is nearing the end of her current UFC deal, and it looks like the former champ will be testing the free agency waters.

Ever since Cris “Cyborg” was taken out by Amanda Nunes last December, there’s been talk and speculation as to whether the Brazilian stars might fight again. While that could still happen, it won’t take place until after “Cyborg’s” talked with other promotions… 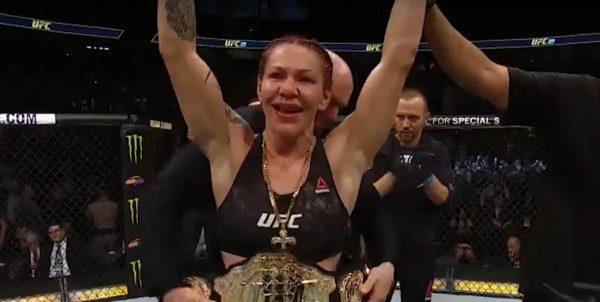 The 33-year-old fighter is booked to fight Shari Spencer on July 27th at UFC 240, which will take place in Edmonton, Alberta. It will mark the first time “Cyborg” has fought since Nunes ended her reign as featherweight champ, and snapped her decade plus, undefeated streak in MMA. It will also be the final bout on “Cyborg’s” current contract.

While talking about her future on Ariel Helwani’s latest show, “Cyborg” had this to say about her pending, free agency (quotes via ESPN):

“I want to see other promoters, see how much value I have. I think it’s cool to see that before you can hear anything [about] that you don’t have value. Let’s see. Let’s see what another promoter has to say.”

Now, since the UFC remains the biggest organization in MMA, one might be tempted to conclude the company will take the necessary steps to ensure “Cyborg” remains on the roster. After all, she’s one of the greatest female fighters of all time, and she has a large following.

But, if you’ve followed “Cyborg” over the years, you know at times she’s had an adversarial relationship with the UFC, and in particular, Dana White. Case in point, following UFC 238, White reportedly questioned whether “Cyborg” wants to rematch Nunes.

But, during the aforementioned interview, “Cyborg” said she can’t “believe” White said that, since according to her, she’s been pushing for a rematch with Nunes this whole time. So, it’s going to be really interesting to see what happens next. If “Cyborg” loses to Spencer, however, her chances of returning to the UFC will likely drop considerably.