Jose Aldo Blasts How he Performed at UFC 237

Jose Aldo clearly isn't happy with how he performed against Alexander Volkanovski on Saturday.

Jose Aldo may have been outscored by one of the top, rising featherweights on the planet at UFC 237, but the legend’s blasted how he performed. 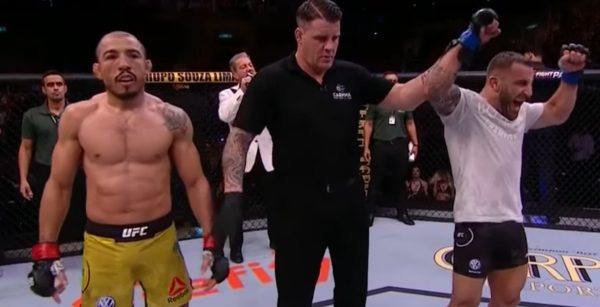 Aldo faced Alexander Volkanovski on Saturday night, and ended up losing to the surging contender via unanimous decision. Since the defeat, the former featherweight champ shared out the statement below (translation via MMA Junkie):

“I’ve never fought so badly in my life. No excuses at all, because that’s not me, but I know about my ability and talent and I can’t do that. Not taking away the merits from my opponent, who did his fight, but I’m sad at myself and put it all on myself, because I let it happen and didn’t do the fight that I should have. It’s over and on to the next one.”

Chances are not everyone’s going to agree with Aldo here, as he did go the distance with a fighter who has won 17 in a row and was coming off a stoppage win over Chad Mendes. But, regardless of whether you think Aldo fought too conservatively or not (he was outstruck by a 129 to 39 margin), it was a massive defeat.

The Brazilian star had talked extensively about his desire to fight for the belt one more time, before his UFC deal ends and he retires from MMA. Unless Aldo changes that stance, he only has one fight left now before he hangs up the MMA gloves.