Carmella has now spoken out about the alleged affair she had with Corey Graves, which was made public only a few months ago.

Rumors have been circulating that WWE superstar Carmella and Corey Graves were having an affair, which caused the breakdown of Corey’s marriage to Amy Polinsky. Even though both have been rather quiet about the situation, Carmella has now spoken out about the alleged affair on Nikki and Brie Bella’s podcast.

As noted earlier, Carmella went on Nikki and Brie’s podcast to deny her alleged affair with Corey Graves. However, the statement she made was not a real denial.

Interestingly, Carmella says she is not a home wrecker in the statement, but she does not mention the affair specifically. She only states she’s not a home wrecker, which certainly does not make her look any better. Of course, it does take two to tango. Corey and his wife are currently going through a divorce, so there must be grounds for that divorce.

Even if they did, I honestly don’t care what they do. If they did, I do feel bad for his former wife and the kids, I couldn’t care less about them and neither should anyone else. If you do not want to be with someone, you end it as an honorable person, not going off with someone else and sleeping with them while you are still married. 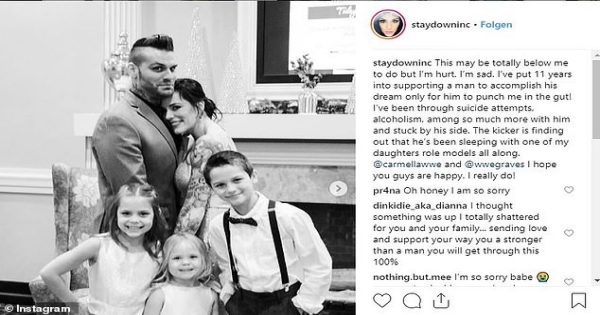 Corey has denied the affair many times, even after his wife made the public allegation on her social media account. Even though the the post has now been deleted, it certainly caused WWE fans to take a closer look at Carmella and Graves.

“This may be totally below me to do but I’m hurt. I’m sad. I’ve put 11 years into supporting a man to accomplish his dream only for him to punch me in the gut! I’ve been through suicide attempts, alcoholism, among so much more with him and stuck by his side. The kicker is finding out that he’s been sleeping with one of my daughter’s role models all along. Carmella and Corey Graves I hope you guys are happy. I really do!”

Shortly after the post was placed online, Graves contacted his estranged former wife and, like a real class act (sarcasm), told her to delete the post or the WWE would sue her. So much for freedom of speech…

Anyway, Corey claims that he had moved out of the family home long before the post was put online.

“It was made out of anger and emotion and it wasn’t what it looked like. I had been out of the house and living on my own for quite some time before that whole situation.”

Once again, his “denial” statements are interesting. He basically said he moved out of the family home some time ago, but does not really say that he did not have an affair with Carmella. Instead, he’s just moving around the actual subject.

Either way, it is speculation at this point and I couldn’t care less what happens to Carmella and Graves. However, I hope Amy and the kids can move forward and be happy.