Josh Emmett returned to the Octagon for the first time in over a year at UFC Philadelphia, and the featherweight scored an exhilarating KO.

Josh Emmett returned to the Octagon for the first time in over a year at UFC Philadelphia, and the featherweight made sure fans would remember it. 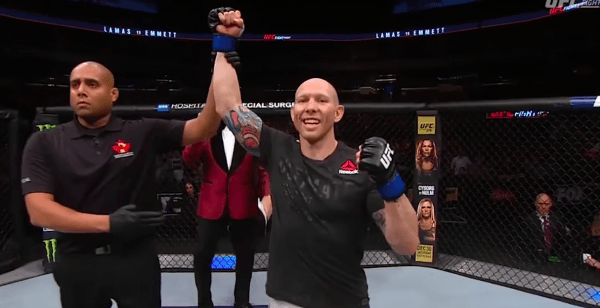 Both men came out with plenty of movement and firing a decent volume of strikes. Emmett tagged Johnson with a nice right midway through the round that pushed the latter back. As the round came to a close, Emmett was pressuring, loading up on his big right.

In round two, Johnson began to find his rhythm and he landed his left more often. In addition, he nicely avoided Emmett’s right hand on several occasions, which prompted a “wooo” from Johnson. Shortly before the second frame ended, Emmett shot in with a takedown attempt.

Emmett charged out in the third and winged some big hooks. Johnson stayed on his bike and looked to counter, but Emmett did appear to score several times. With less than a minute left, Emmett torched Johnson with a massive right and that was that.

Emmett hadn’t fought since February, 2018, when he was stopped by Jeremy Stephens and incurred extensive, facial injuries.

Here are the results so far for UFC Philadelphia.