The left just hit a new low when it comes to politically correct foolishness after it was announced that the wife of newly-elected California Governor Gavin Newsom will go by the title of “First Partner” rather than “First Lady.”

Newsweek reported that Jennifer Siebel Newsom, a filmmaker and political activist, updated her Twitter profile last week to say that she is the “First Partner” of California. 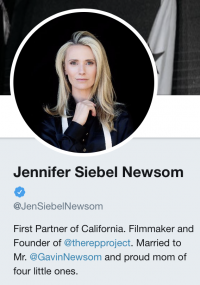 Siebel Newsom is known for being a fierce feminist who directed the 2011 documentary Miss Representation, which attacked the limited way women have been portrayed in film and in the media. She then started the nonprofit group the Representation Project, which strives to inspire “individuals and communities to create a world free of limiting stereotypes and social injustices.” She is the second wife of Governor Newsom, who was previously married to former Fox News host Kimberly Guilfoyle, the current girlfriend of Donald Trump Jr.

After changing her Twitter profile to say “First Partner, Siebel Newsom tweeted about what this title means to her.

Being First Partner is about inclusion, breaking down stereotypes, and valuing the partnerships that allow any of us to succeed.

Grateful for this opportunity to continue advocating for a more equitable future – now let’s get to work! https://t.co/sXwfev7BFy

That’s all well and good, but how is it offensive to refer to the wife of the governor as First Lady? Would we not refer to the husband of a female governor as First Man? This just goes to show that in the eyes of the left, stating someone’s gender in any way is no longer acceptable. They’re worried some would be offended if a man identified as a man, and a woman identified as a woman. We would not be surprised at all if soon enough, the title of First Lady is banned by a future Democratic president and we end up having to call his wife “First Partner” as well.

Frankly, being a liberal today seems exhausting. Doesn’t getting offended by every little thing become tiresome after awhile?

Regardless of what she writes in her Twitter profile, it should still be okay to call other wives of governors FIRST LADY until further notice!