The WWE is moving the Crown Jewel event in Saudi Arabia to a new venue supoosedly because of construction, but seems it could be from lack of ticket sales.

While the WWE has been promoting its upcoming Crown Jewel pay-per-view as one of the biggest of the year, it seems like the event is not going to meet anyone’s expectations. Even though the company has tried its best to have a good card, this week the news broke that the company has downgraded the venue for the event.

An official press release from the WWE stated that the company decided to downgrade the venue. The original venue had a capacity of 68,000; while the new venue barely holds 25,000. That’s a big drop.

Naturally, the press release caused many people to speculate about the cause for the downgrade. Of course, one of the most evident reasons for this downgrade would be a lack of ticket sales. If too many seats are unsold, the WWE would not be able to hide the fact that their event sold badly.

Dwindling ticket sales for this event would not be that unusual. Many fans travel internationally for events like these, but Saudi Arabia is not the kindest country for female wrestling fans. While I would love to witness an event like this one, even I do not have the willpower to face Saudi Arabia for Crown Jewel.

As for the local fans, since I am not from Saudi, I have no idea how big the fan base for the WWE is over there. I have no doubt there are some loyal fans in Saudi, but maybe not enough to fill the seats. Or maybe the price is too high for most fans to afford?

Construction at the Original Venue 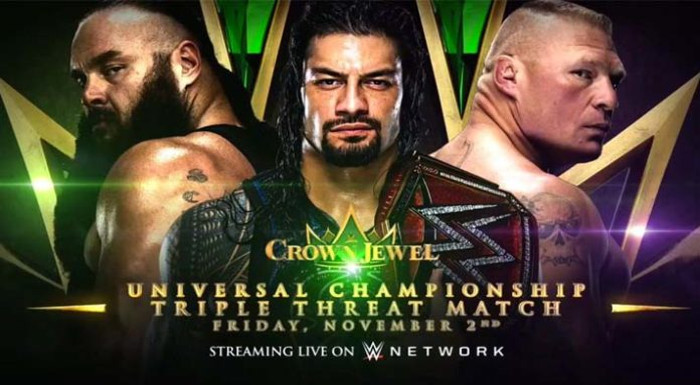 While many believe a lack of ticket sales is the real reason for the move, the WWE says construction on the original venue is the true reason for the change of venue. However, I find myself quite skeptical about it. If you would have sold 30,000 to 60,000 tickets for the event already, surely you could not downgrade to a venue that can only hold 28,000.

Despite my skepticism, NoDQ.com claims that two football matches have been moved the same reason which is construction to the building. But, the skeptic in me reappears and wonders once again and wonders if the WWE did not need to go to a venue with larger capacity?

I must mention, even though the WWE has downgraded the event and will not make as much on ticket sales, they are earning big on this deal with Saudi Arabia. So, they may not be performing for the largest audience, the deal with Saudi is more than worth the investment for WWE management.

Want the latest news about Crown Jewel in your inbox? Sign up for our newsletter today and be the first to know!

WWE Knows It Has A Problem With An Older Wrestling Roster