Super Show-Down In A Nutshell: Big Show Down Under

The Super Show-Down in Melbourne, Australia has come and gone. it’s time to review the show with the best, worst, and most entertaining matches.

Hello again everyone! It’s time for one of the more unique Nutshells, as we are writing up one for the concluded Super Show-Down that happened in Melbourne, Australia earlier on Saturday (for those of us, like me, on the east coast of the United States, it was very, very early on Saturday). The big show Down Under has come and gone, and it’s time to review the show as we do, Nutshell style. So let’s not make you wait any longer than you already have. Let’s crack open this Aussie Nutshell!

It surprises me somewhat to say it, but then again, maybe not…the match of the night belongs to the cruisers. You could tell Buddy Murphy wanted this one badly in front of his home crowd. Cedric has been strong for as long as I can remember watching. When you consider that there are things most cruisers can do that most others cannot, we got this match as our treat.

While the main event at Super Show-Down was a spectacle, it was also basically a train wreck (in a good, entertaining sense). But that wasn’t topping the title match. 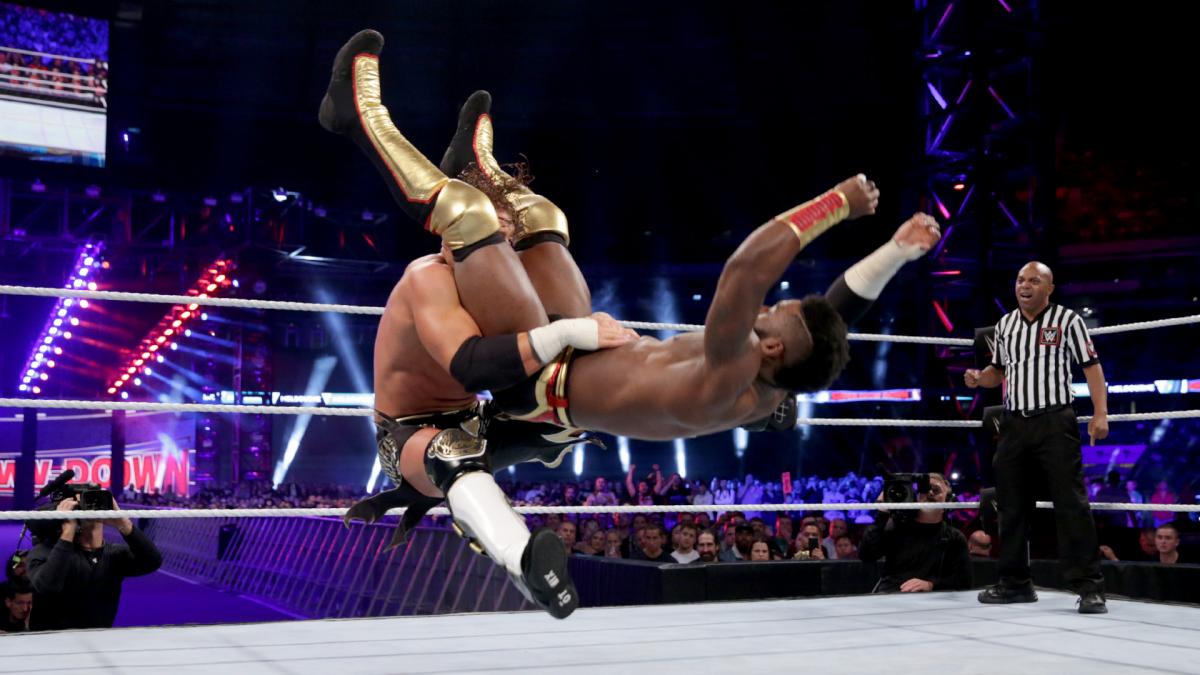 Would it be unfair to drop the Cena/Lashley versus Elias/Owens match here? I don’t think so. It’s not that the match was terrible…but…it’s just an oddity (and no, I don’t mean like Kurgan). Elias is super over and gets heat easy. Owens is very talented and a good heel, but seems like he’s been a glorified jobber lately. Lashley just can’t get moving, and Cena is becoming the very part-time Superstar he not that long ago ripped to pieces.

It wasn’t that it was a terrible match. It was just very predictable. Oh, and we saw the sixth move of doom, which is apparently just a fist.

Also, the women’s six man tag match. Was just…not interesting. OK, maybe it had a neat spot or two, but really and truly, it was a filler match and not much else.

I won’t say it was a botch or bad, but something seemed off at the end of the Daniel Bryan/Miz match.

Maybe it was me, but the audio relative to picking up some chants was not always the best. I am sure I missed a few.

I’d have to go with the chaos and carnage that concluded the evening, including putting poor HBK through the announce table.

It’s a reach on a night like this, but I’d go with Asuka and Naomi. They took the loss so that even a couple of heels could get some home town fan support with a win. Good for The Iiconics to get a decent win, too. 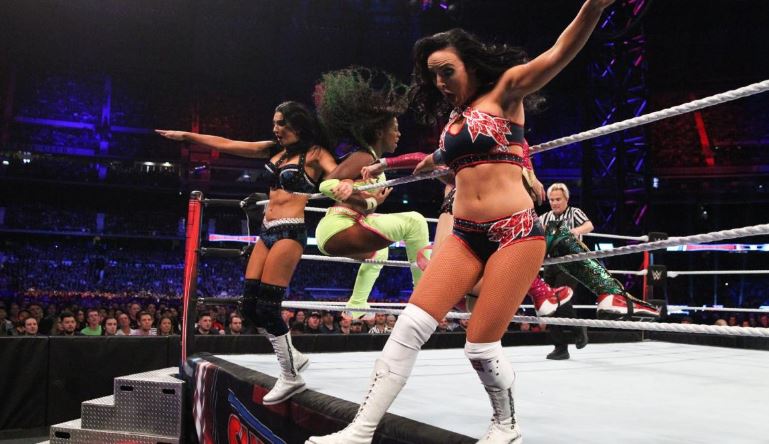 Nothing to report here.

I think a lot of people speculated that Hunter would have to win this match in order to set up the rumored tag match for Crown Jewel. Hunter won, and following the match, Undertaker and Kane reminded everyone that they are the Brothers of Destruction, laying waste to both Triple H and Shawn Michaels, doing damage to the ringside area in the process.  If there had been any doubt about if they were going to  get to set up a tag match or how, all doubt has been erased, outside of HBK still technically being retired. 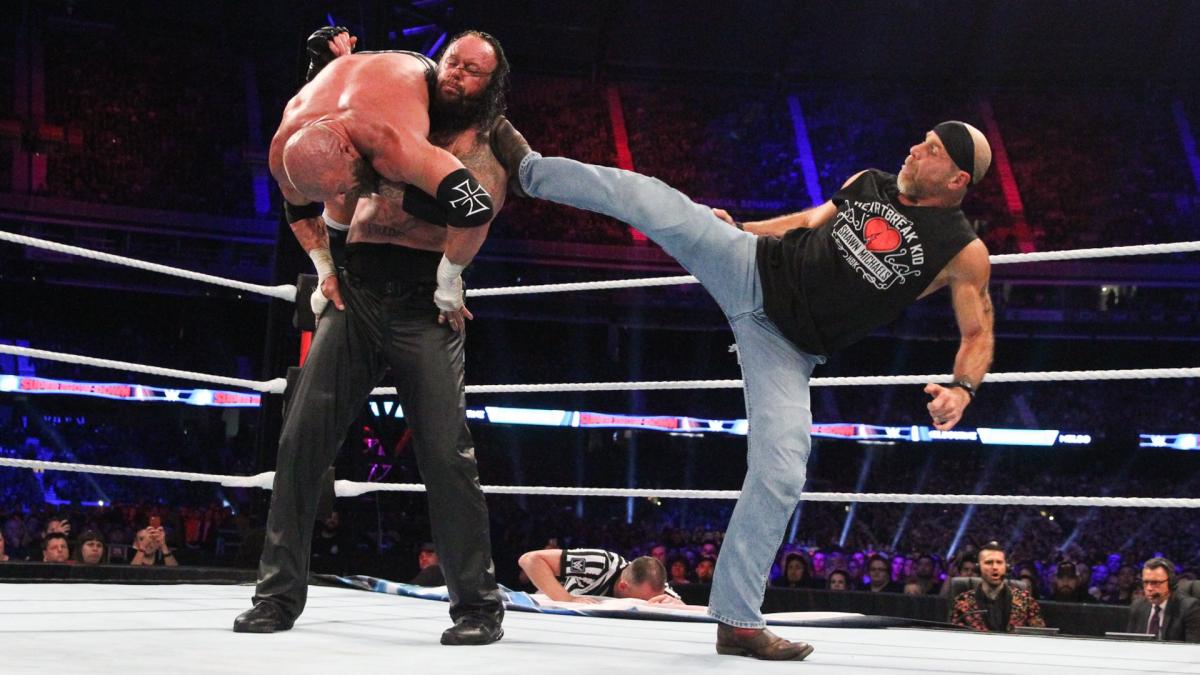 As far as cheap shots with the title belt go, Becky’s was pretty damn bad. Good enough for the DQ finish they were booked for, but it was a weak spot otherwise.

If you want to split hairs, there was slop in the main event too…but what do you expect out of two part-timers.

Really nothing to report here.

I figured this would happen a while ago, but Billie Kay and Peyton Royce did manage to get a big win on the show, in front of their nearest and dearest fans on their homecoming trip.

And, while the women seem more notable because they work on a main roster televised show, Buddy Murphy is also a native son. And at Super Show-Down, he bested Cedric Alexander to become the new Cruiserweight champ.

It sure feels like there are opposing writers locked in a creative feud when booking Charlotte versus Becky. One minute, Becky should be the heel. Then the next minute, Charlotte looks more the heel part. For like, two months, we have no definitive position for either. Eventually we should, however.

For all of it’s slop and such, the main event gave fans what they wanted.

All in all, a fairly straightforward and relatively predictable card. That is all well and good, especially when considering all the factors in play.

Looks like we will get Underaker and Kane against Hunter and Kane for Crown Jewel. Also, Daniel Bryan has earned himself a new title shot.

All in all, not a terrible show.

The New Day defeats The Bar to retain the SmackDown tag titles.

The Iiconics defeat Naomi and Asuka

Ronda Rousey and The Bella Twins defeat The Riott Squad

The post Super Show-Down In A Nutshell: Big Show Down Under appeared first on Wrestle Newz.