Taya Valkyrie and Johnny Mundo's wedding was interrupted and ruined by Matanza Cueto on Lucha Underground. And, Ricky Mundo was spurned.

Taya and Johnny are married in real life, but we got to witness the happy occasion again on Lucha Underground. Of course, things did not go as well at the actual wedding, since the nuptials were accompanied by lots of drama and new rivalries. Here is the story!

Things started wholesomely and romantically with Taya and Johnny in the middle of the ring. Dressed in lot of lime green, which frankly hurt my eyes, Famous B was about to declare Johnny and Taya husband and wife. However, one member of the roster had different ideas.

Before Famous B could make the pronouncment, Matanza Cueto ran out to the ring! Causing utter devastation and destruction, the wedding was officially cancelled.

While one would assume ruining a wedding would be a bad thing, Johnny Mundo and Taya Valkyrie are the heels in this situation. Matanza got a roaring welcome and loads of cheers as he caused absolute havoc in the ring. Want to see this for yourself? Be sure to check out Lucha Underground’s episode 12 of season 4 on El Rey Network.

Is Ricky Mundo Going Off the Deep End? 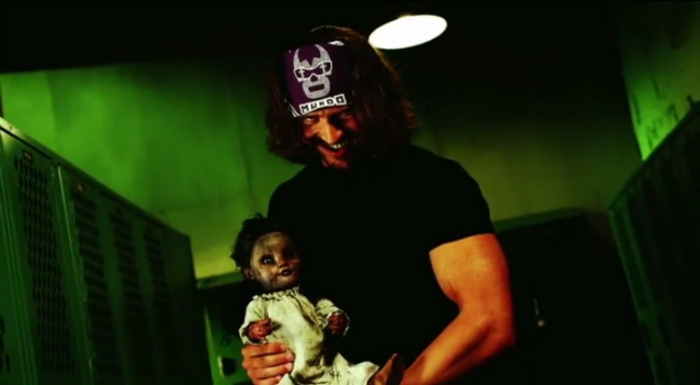 Marty “The Moth” Martinez is no longer the only creepy dude on the Lucha Underground roster, since Ricky Mundo appears to have lost his marbles.

At first, things looked bright for Ricky Mundo as he was to be Johnny’s best man the wedding. However, an unexpected return saw Ricky’s aspirations as best man in tethers as he was demoted to ring bearer. As you can imagine, Ricky was far from happy with the arrangement.

The mental decline of Ricky Mundo spanned several episodes of Lucha Underground. There were numerous segments featuring Ricky and a creepy doll, who told him “you show him just how useful you can be.”

With the creepy doll still by his side, Ricky Mundo took a perch in the audience to attend the wedding of Johnny and Taya. However, once the Matanza attack occurred, Ricky was seemingly amused by it all. How much resentment is there towards Johnny and Taya? Does Ricky Mundo have a hidden agenda? Could he have a hand in Matanza’s rampage? We will have to tune in to find out!

Do you want the latest updates on the Johnny Mundo and Taya Valkyrie storyline? Be sure to sign up for our newsletter!