Natalya and recently revealed that her late father, Jim "The Anvil" Neidhart, was no fan of Good Brother Luke Gallows. In fact, Neidhart hated him.

If you ask wrestlers who the most well-liked person in the biz is, chances are they’ll give one of two names: Glenn Jacobs, a.k.a. Kane, or Luke Gallows. However, Natalya and Tyson Kidd recently revealed that Nattie’s late father, Jim “The Anvil” Neidhart, was no fan of Good Brother Gallows. In fact, Neidhart hated him.

Speaking with Chris Jericho on his “Talk is Jericho” podcast, Kidd described how he’d been watching an episode of Raw with Neidhart when a match featuring Gallows came on, and Neidhart’s entire disposition changed (transcription courtesy of Fightful):

“He’s like, ‘This guy? Oh, he’s horrible, I hate this guy,’ ” said Kidd, who then tried to recall when Neidhart and Gallows may have crossed paths. “There were a few years where Luke Gallows was released and he was kind of this king of the indies type. Luke would go get a booking in South Africa and kind of be the booker over there. … I thought, oh man, damn, Gallows and Jim had a bad experience?“

Again – Gallows is by all accounts one of the most well-liked guys in the locker room, so it’s odd that Neidhart would hate him. However, Kidd went on to explain that his father-in-law, who was battling Alzheimer’s, had likely confused Gallows with someone else:

“He’s like, ‘I beat the hell out of this guy before.’ Then a little bit going on and he goes, ‘I remember Dynamite [Kid] ribbing the hell out of him.’ Then I knew, he was confusing Gallows with somebody else but the funny thing is, anytime I put on a Gallows match, same facial change.“

Nattie then revealed that, after her father passed, she told Gallows exactly how he’d felt about him – and his reaction proves why he’s one of the most likable guys in wrestling:

“I saw Gallows actually at Summerslam and I said, ‘My dad hated you.’ He goes, ‘Nattie, I love this story. I love that your dad hated me.’ My dad just, he didn’t know. I told him the whole thing,” she said.

First, that’s one of the most bittersweet stories I’ve ever heard. Second, who in the world could Neidhart have confused with Gallows?

After a semi-in-depth look at the Wikipedia pages of both Neidhart and The Dynamite Kid, my best guess is that Neidhart thought Gallows was Boris Zhukov, the lesser-known half of The Bolsheviks. 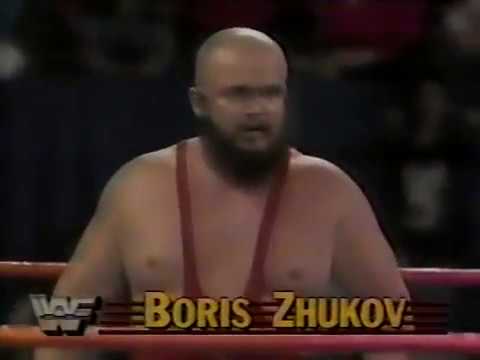 Zhukov – real name James Kirk Harrell – tagged with Nikolai Volkoff from late 1987 to early 1990. He was gone from the WWF by 1991. Notably, The Hart Foundation defeated The Bolsheviks in a whopping 19 seconds at WrestleMania VI in Toronto, which could very well be the aforementioned time that Neidhart thought he “beat the hell out of” Gallows. Further, Zhukov was “often ridiculed by Vince McMahon and other WWF commentators for his large head,” and wrestlers like The Dynamite Kid could have continued that ribbing backstage.

Plus, no offense to Gallows, but there is a passing resemblance between him and Zhukov.

In case you’re wondering, Zhukov, is still alive. In fact, he was a plaintiff in the class action lawsuit that over 50 retired wrestlers filed against WWE in July 2016 alleging that they incurred traumatic brain injuries during their tenure and that the company concealed the risks of injury. The lawsuit was thrown out by the U.S. District Court of Connecticut earlier this month.