Woman Caught Ringing Doorbells At 3 AM, What’s On Her Wrists Is Terrifying

A woman wearing only a t-shirt and broken handcuffs was captured on video ringing doorbells in a Texas subdivision at 3 am.

Authorities in Montgomery County, Texas are on the search for a woman in broken handcuffs who was seen ringing doorbells in the Sunrise Ranch subdivision near Lake Conroe.

A doorbell camera caught the unknown woman appearing to try to be quiet as she attempted to get someone to answer the door. Five people have reported that she stopped at their homes on Friday at about 3 am.

The Montgomery County Sheriff’s Department has investigated this possibly being a woman who has been reported missing, but so far they have not identified anyone matching the woman in the video. They aren’t sure if this woman is a victim or perhaps attempting to break into homes by pretending to need help. 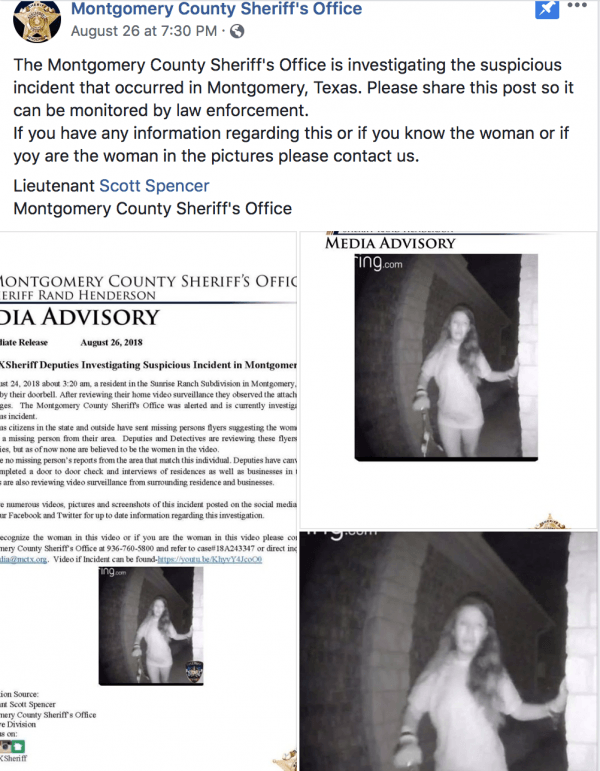 Jennie Drude’s Ring Doorbell captured the woman coming out from behind a bush at 3:20 am on Friday. She has broken restraints dangling from both wrists and she is not wearing pants or shoes. She is only clothed in a t-shirt. As she rings the doorbell, she is seen cautiously looking down the street. A short clip of the terrifying video can be seen below.

Drude reports the woman was out of breath and heavily breathing. By the time she got to the front door, the woman was gone. None of the other homeowners were able to get to get to their doors in time either, leaving this a mystery. Now, people don’t know whether to be afraid for this woman or if they should be in fear of her!

For more about this case, watch the video below.

Ring doorbells have captured some alarming activity since they became popular. In California, a first-grade teacher was videoed attempting to break into a home! Click here to watch that video.