Rollins takes on Dolph Ziggler again in an attempt to regain his Intercontinental Championship. Being outnumbered in recent days by Ziggler and McIntyre, 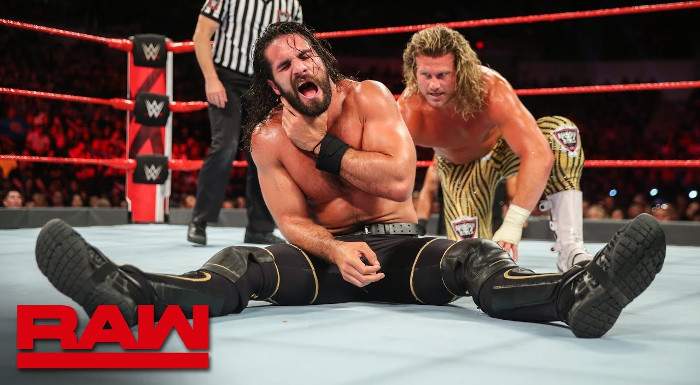 Dolph Ziggler has been on a roll since he gained the Intercontinental Championship with a ‘little’ help from Drew McIntyre. However, things seemed to turn in favor of Seth this week, as Dean Ambrose made his long-expected return. But is it all a little too easy? Is Dean as friendly as he seems? Is there time for unicorns and pancakes? Maybe even dancing little people dressed as some delicious dessert? Ugh, the WWE has made me into a paranoid mess!

Okay, let’s say the WWE goes with the mainstream scripts and allows Dean Ambrose to help Rollins during the match. It could mean Seth Rollins becomes the Intercontinental Champion again. Still, where does that leave Dean? It would be more logical for the WWE to turn Dean, make him cost Seth the championship, continuing to an epic rivalry with Seth Rollins. Imagine, two former Shield brothers pitted against each other again, leading to a match of epic proportions!

Some big pay-per-views are coming up after SummerSlam, and a Dean turn could be big! A match between Seth and Dean would be even better, and it could also give McIntyre the opportunity to turn on Dolph, taking him on for the championship belt and winning it somewhere down the line.

Drew has been so impressive on the main roster, and I cannot wait for his first championship reign. If things work out as I predict, there are some exciting months ahead. Of course, the WWE could go with the usual predictable format, but I hope they pull out all the stops for Summerslam 2018 and give us a show that makes The Young and the Restless seem like a comedy.

Now that Dean Ambrose is back, the big question surrounding this match isn’t so much who will win as it is whether Ambrose will turn on Seth Rollins. If he does, Dolph Ziggler retains the Intercontinental Championship; if he doesn’t, Rollins likely wins.

So, will Ambrose turn or won’t he?

I’m leaning toward he won’t, which means we’ll get a new Intercontinental Champion on Sunday. This way the Ambrose turn could be done later to set up a big match between him and Rollins at another PPV, like Survivor Series or even WrestleMania 35.

I might be the odd man out here, but I don’t think WWE will turn Dean Ambrose on Seth Rollins, or at least not this soon. That would be a colossal angle, but so would another Shield reunion, something that barely happened last year before Ambrose got hurt. There’s just too much money in a reunion, particularly if Roman Reigns wins the Universal title from Brock Lesnar at a moment where he’s been coming off as the face WWE has always seen him as more than anytime in his singles run.

While I could easily see Rollins regaining the Intercontinental title from Dolph Ziggler, how about this wildcard: Ziggler retains but something happens that creates tension between him and Drew McIntyre. McIntyre needs to break out, his upside is massive, and challenging his old friend Ziggler for the second biggest men’s singles title in WWE would be an excellent way to do it.