Extreme Rules 2018 is this weekend, so it is time for some of our predictions! Sandra, Katie, Jack, and Hunter once again delight you with their takes

Extreme Rules 2018 is this weekend, so it is time for some of our predictions! Sandra, Katie, Jack, and Hunter once again delight you with their takes on the upcoming pay-per-view. Check out their amazing predictions and preview below!

Get the latest Extreme Rules updates delivered right to you Monday morning! Subscribe to our newsletter. 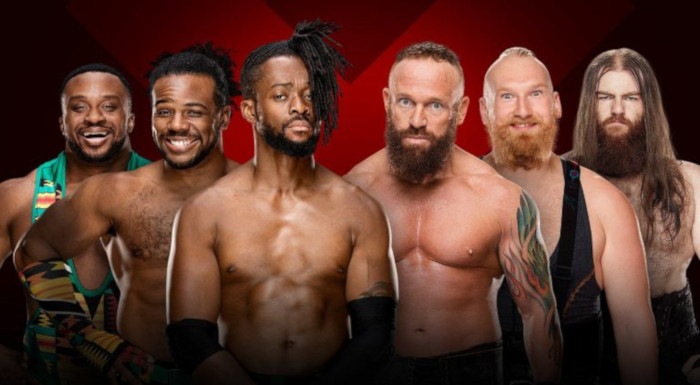 Sandra: Even though this match will take place in the kick-off show, it is still one of my most-anticipated matches of the night. New Day always puts on an impressive match and so does Sanity.

Sanity only recently made it to the main roster, it is unlikely they will lose; this is on a personal level as well on a neutral reporter perspective. The WWE is likely to push a rivalry between Sanity and the New Day, which could elevate Sanity as a faction on the SmackDown Live roster. So, from both a professional and a personal point-of-view, I’m giving the win to Sanity for this one.

There is one desire I do have for this match that has nothing to do with the competitors. I want Nikki Cross to come up to the main roster and interfere. She is amazing in the ring, not to mention her character is absolutely amazing. In fact, once she appears, she can continue her rivalry with Asuka. So, I pray humbly to the wrestling gods to let it come true!

Hunter: The New Day are the best group in WWE and Sanity was best in NXT. I expect this match to be wild. Turn in early for some fun. These are six men who are willing to break their necks to get a match over. Sanity wins because they’re pushing this feud forward and will be challenging for the tag titles soon, but not until they belts are off the Bludgeon Bros. The New Day has such a strong gimmick and following that wins and loses don’t hurt. Despite a lot of wish casting, we won’t see their break-up until later in the year. Big E’s singles run is coming.

Katie: The New Day hasn’t been doing much as of late, and Sanity was just called up to the main roster. In other words, all signs point to Sanity taking this one, and the rivalry will likely continue beyond Extreme Rules. As for Nikki Cross, should could very well make her presence known here, but I won’t be holding my breath.

Jack: Sanity needs the win more than New Day and could put the recent NXT call-ups on better footing after some questionable booking as of late. Expect Sanity to win. But…

I agree with Sandra: My favorite Sanity member has always been Nikki Cross and to see her hot-shotted to the main roster with an appearance Sunday would potentially be the most memorable part of this match. I also agree with Katie, that I won’t be holding my breath either. 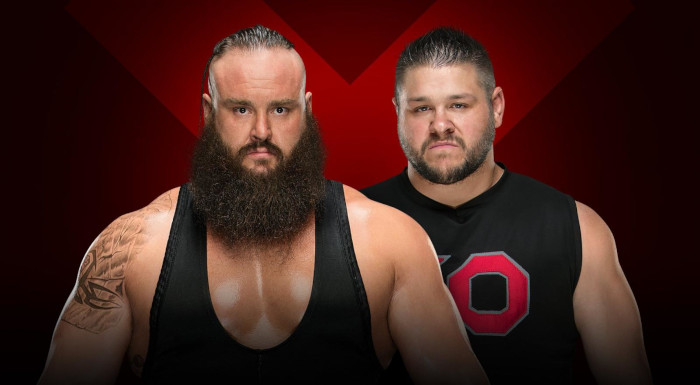 Sandra: I am loving this rivalry between Braun Strowman and Kevin Owens, even though there is no title on the line at the moment. I’ve been thoroughly entertained seeing these two, especially after the whole port-a-potty incident.

Nobody wants to be in a steel cage with the Monster Among Men, but it is a cold reality for Owens. At the moment, I think the WWE wants Braun to have something to do until he cashes in the Money in the Bank briefcase, making me think Owens will take the win somehow to a rematch can take place.

Despite me believing that Owens will win, I would love to see the Monster Among Men do his typical destruction bit and take the win. Still, I wouldn’t mind seeing this rivalry continuing for some time. So either way, I will be happy.

Hunter: This will be the funniest match of the night. I’m not a fan of cage matches because they tend to be formulaic and drawn out. But these two know how to deliver in any circumstance. The briefcase gives a mysterious power of invulnerability to its holder. You still lose, but the luster is never off you because you can always win. So KO uses some shenanigans to win.

Katie: Braun Strowman is the “Monster in the Bank.” Hopefully, one day in the near future, he will cash in that contract and finally vanquish Raw’s absentee Universal Champion, Brock Lesnar. Until that day comes, however, Strowman must keep his monstrous momentum going. Kevin Owens will put up a dirty fight in this match, but I believe Strowman will get the win in a big way.

Jack: The Braun Strowman vs. Kevin Owens feud has been one of the most over angles on Raw of late, and also legitimately funny. Classic chickensh*t heel Owens has taken his cowardice to new comic heights and the “Monster in the Bank” has never looked more monstrous.

But expect Strowman to go over on Sunday. Like most of you, I’m just jacked to see what these two incredible talents do to each other inside – and outside – the cage! 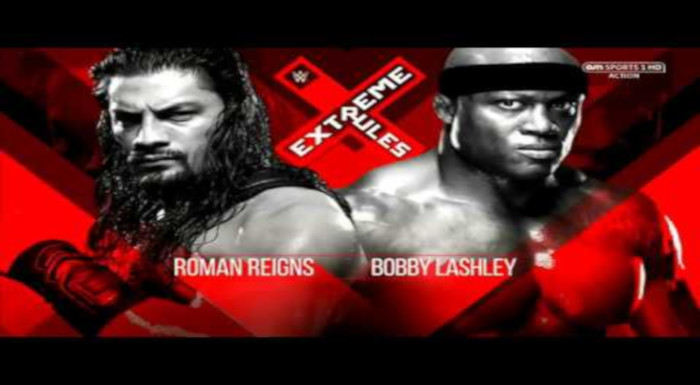 Sandra: Hate to say it, but I could not care less about this match. No, it’s not because I don’t like Roman Reigns or Bobby Lashley, because I think both men are talented in their way. Still, I find myself having zero expectations for this one.

With the rumors surrounding Bobby Lashley and a possible title match with Brock Lesnar, it is likely that Lashley will take the win from Roman Reigns. Unless the WWE is planning otherwise and making Roman the leading contender, Lashley will leave Extreme Rules victorious. As it stands now, the WWE has been booking Lashley strong.

Still, no matter how this match turns out, I don’t care. Lesnar has been running around with the title for so long; I find myself not getting excited anymore about his possible opponent. However, I must give props to Lashley, since he is the one that peeked my interest just a little.

Hunter:  Will I try to enjoy this match? Only when I close my computer and mute the audience. Roman Reigns matches are unwatchable thanks to idiot fans. And guess what? They won. The Heckler’s Veto is alive and well! I agree with the rest of the squad should and will Lashley wins what would be a great match if anyone childless above the age of 20 was banned from entering the arena. Which, frankly, should be the case for all WWE shows.

Katie: I don’t care about this match, and I’m sick of seeing Roman Reigns as the No. 1 contender, so I sincerely hope Bobby Lashley wins for a change of pace.

Jack: I had zero interest in this match until the pull-apart brawl on Monday Night Raw, which was one of the hotter openings of the show in recent memory. The purpose of the segment was to get fans more invested in this rivalry, and I think WWE did that successfully.

But expect Bobby Lashley to get the win. WWE seems to invest too much in him to slow any momentum with a loss Sunday. Reigns losing doesn’t hurt him one bit. 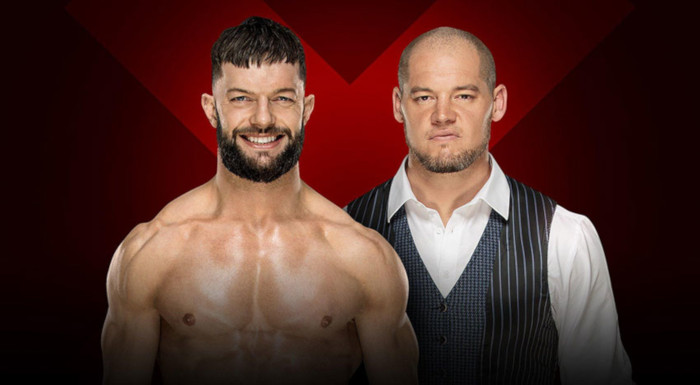 Sandra: Even though I loved Corbin in NXT, I found myself less interested in him once he made the main roster. However, I was pleasantly surprised when he did his character change to “Constable Corbin.” I love his whole persona right now, plus he seems to have fantastic chemistry with Finn Balor.

The rivalry between Balor and Corbin seems to be hitting off for the WWE Universe too. I know Vince loves Corbin though, so I am sure Corbin will come out victorious in this one.

I love both Finn Balor and Baron Corbin, so choosing a winner here is like picking my favorite type of Dutch cheese. I would prefer a Corbin win, but only to continue the feud he has with Balor at the moment.

Hunter: I’m not on-board with Constable Corbin yet. I never disliked Corbin, but people who wrestle in street clothes always bother me (DEAN). I don’t think WWE has long-term plans for either one of these men, which is a shame. Finn wins because the heel authority figure always loses, right?

Katie: “Constable Corbin” has been much more enjoyable than “Lone Wolf” Corbin, and buzzing his hair was possibly the best decision of his career. As much as I want more for Finn Balor, this rivalry has long-term potential, so I think Corbin will get the win. Plus, he’s an Authority stooge – and The Authority rarely loses outside WrestleMania.

Jack: “Constable Corbin” has been the best thing to happen to the former NFL star since he came to the main roster. Finn Balor is not only the first Universal Champion but continues to be one of WWE’s top tier young talents.

I know many are expecting a Corbin victory here, but I’m going to go with Balor. Just call it a hunch.