A rare find in Hollywood.

Hollywood A-lister Matthew McConaughey continues to stand out from the Hollywood crowd with traditional, down-to-earth views on big topics like marriage and parenting that likely stem from the actor’s Texas roots.

There’s virtually zero respect for traditional marriage in Hollywood. Not only do couples get divorced left and right, but Tinseltown liberals would rather celebrate a civil union between two men or two women than a union between one man and one woman before God.

Much too often, traditional marriage is mocked and attacked by Hollywood liberals.

Actor Matthew McConaughey and his wife Camila Alves, however, are very different. They do not fit the Hollywood mold. 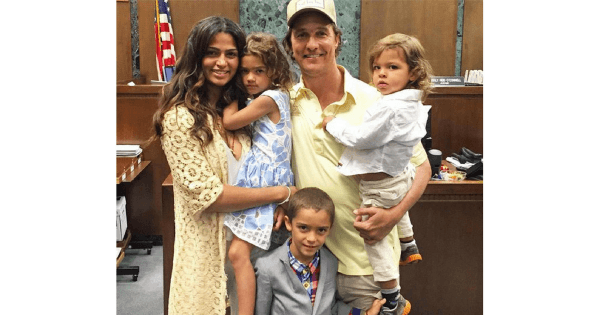 McConaughey married his wife Camila in 2012. Together, the couple has three children.

The Dazed And Confused star also likes to keep parenting old school in his house. Refreshingly, the A-lister’s children are well acquainted with the word “No!”

McConaughey takes his role as husband and father very seriously. In fact, the Academy Award Winner sees those as his most important roles.

In an interview with GQ, McConaughey revealed that he and his wife take the sacred institution of marriage very seriously:

Furthermore, McConaughey and Alves don’t view marriage as an end-goal.

Instead, the two view it as a beautiful new adventure:

I had to get to the point where I saw it as more than just the thing to do. I wanted to really want to. You know, I didn’t want it to be a destination; the fun is that we’re on the adventure together. So I spent a lot of time with her. We talked about it spiritually.

Perhaps if more people in Hollywood thought about marriage in the way McConaughey and Alves do, maybe so many marriages wouldn’t end in divorce.

Not Your Typical Hollywood Star

It’s quite rare to find someone in Hollywood who speaks out in support of traditional marriage like this.

If you agree with him, you will want to read what Christian survivalist Bear Grylls says is the secret to his lasting marriage.