Shawn Michaels now regrets coming out of retirement for the 2018 Crown Jewel event. Plus, Andrade addresses reports on his WWE status.

Shawn Michaels recently revealed that he regrets coming out of retirement in 2018. He returned to tag team action to participate in the Crown Jewel event that took place in Saudi Arabia.

It’s taken some time, but after two years of reflection, Shawn Michaels recently stated that he regrets coming out of retirement for Crown Jewel.

For those that may recall, the bout placed Undertaker and Kane versus Triple H and Michaels.

Still proud of this match and honored by the @WWE Universe’s response to its legacy. #HBK vs @undertaker at WrestleMania 25. Will we see the #GreatestWrestlingMatchEver at #WWEBacklash? pic.twitter.com/LxORYkisOA

In a recent Zoom interview, Michaels explained that he wasn’t aware the Undertaker was looking at the match as the one to “walk away” on.

During The Last Ride docuseries, Taker, whose real name is Mark Calaway, noted that had the bout come off as he intended, it would have “been enough” for him. Therefore, it makes sense how Michael’s opinion has shifted.

The Crown Jewel event was the first time the Heartbreak Kid had wrestled since his final match at WrestleMania 25. He faced off against The Undertaker in a match that was one of his greatest.

Sadly, the bout in Saudi didn’t do as well. There were some botched moments, and HHH also got injured. He tore his pectoral, which required surgery and rehab.

Triple H told the New York Post last June that Michaels was encouraged to come out of retirement. He got “talked into” it as a way of having some fun in the squared circle one more time.

Michaels noted that the match was “fun” for him and a chance to work with his friends. But he also stated that “all I can do is apologize to the guys”.

Thankfully, it seems as if Michaels has been able to make peace with that match. He’s broken it off from the rest of his in-ring career, revealing it, “lives in a separate” world to him.

At the age of 55, Shawn Michaels currently is an NXT producer for the WWE.

One person that might also have some WWE regrets is Andrade. Recent reports have been buzzing that the former United States Champion has asked for his release from the company.

But nothing has been confirmed as of yet … until now.

Reports have surfaced that Andrade has asked for his WWE release. It was noted that this all went down backstage during the March 8th edition of Monday Night RAW. 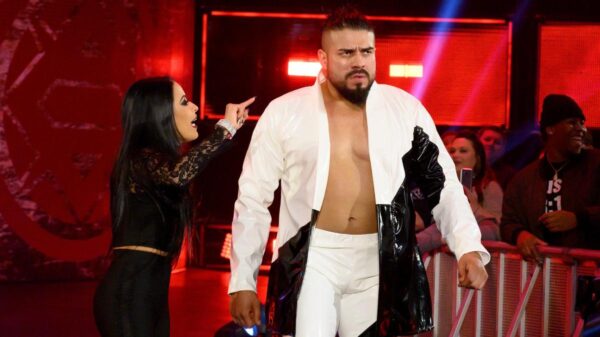 Shortly after, Andrade deleted the “WWE” from his social media bios.

Without confirmation from either the WWE or the superstar, it was speculation. However, thanks to a Twitter post, these reports are verified.

Andrade jumped on Twitter the morning of Thursday, March 18th. He posted a tweet confirming the reports on his WWE status were true.

The rumors are true and I don’t know what the future holds but I want to make my dreams come true. thank you for giving me so much support these last days Los rumores son ciertos y no se lo que me prepara el futuro, pero quiero hacer realidad mis sueños. Gracias por tanto apoyo🙏🏼

Nothing yet from the WWE on whether they will grant Andrade’s request. Reports are circulating that he won’t be released. He’s still on their website as part of the RAW brand, and official WWE roster listing.

Andrade was last seen on the Red brand in October 2020. He and (then) associate Zelina Vega were taken out by The Fiend and Alexa Bliss.

Andrade took time off after that for a minor procedure. He was scheduled to be away from television for about four weeks. Sadly, he hasn’t been seen on WWE TV since.

While rumors were stating that he might go to NXT, he was not officially designated to any brand during the 2020 Draft. Andrade is currently engaged to WWE Superstar, Charlotte Flair.