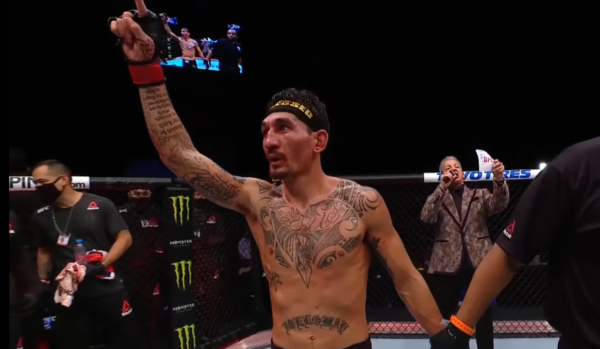 Holloway faced fellow contender, Calvin Kattar on Saturday in the headliner for UFC Fight Island 7. The bout was Holloway’s first since he battled Volkanovski for a second time last July and lost via split decision.

Well, not only did Holloway return to the win column with a decision win, he did so by out striking Kattar via a staggering, 447 to 134 margin.It was one of the most impressive wins of Holloway’s career to date.

During the post-fight presser, White was of course asked about what’s next for Holloway, and he said this (quotes via MMA Junkie).

“Tonight, he fought a bad dude that a lot of people thought was going to beat him. He went out and treated him like No. 6, so he did what he needed to do in spectacular fashion tonight.

I think that he deserves to fight Volkanovski again.”

Since a lot of people scored Volkanovski – Holloway 2 for the latter, a lot of people argued a third fight was in order. But, the champ made it clear, he was ready to move on.

Up next, on March 27th, he’s expected to fight Brian Ortega. But, according to White, if Volkanovski wins that fight, he’ll have to concede Holloway is next.

“Listen, he’s got this Ortega fight coming up,” White said.

“I think for a guy like him to watch this fight tonight when he’s the No. 1 contender – and like I said to you guys tonight, a lot of people whom I respect thought Calvin Kattar was going to win this fight tonight – the way that he looked, Volkanovski can’t even deny Max deserves another shot.”

Given Holloway’s performance on Saturday, what he’s accomplished to date, and how close the rematch with Volkanovski was, it’s hard to deny he deserves another title shot.

You can understand why Volkanovski wanted to change things up, and that’s happening with the Ortega fight. If Ortega wins that bout, then the case for Holloway’s title shot is even stronger, since he beat ‘T-City’ in 2018.