Nia Jax has been accused of being “unsafe” in the ring in the past. The issue has come into the spotlight again after a RAW botch involving Dana Brooke.

And speaking of the bout, it turns out that Shayna Baszler’s count-out during that very same match was not part of the original plan and was unscripted.

Nia Jax has a long history (and bad reputation) around legitimately hurting her competitors in the ring. From Bayley to Becky Lynch, plus others, her actions have caused many colleagues to end up on the injury list.

In fact, being an “unsafe worker” because of botched moves is a label that has followed her throughout her career. It has also left a bad taste for many WWE fans over the years.

Last night Jax could have added another co-worker to that injured list when she was placed in a six-woman tag team bout during RAW. Nia, along with Shayna Baszler, and Lacey Evans were pitted against Charlotte Flair, Dana Brooke, and Mandy Rose.

There was a part in the match were Jax chokeslammed Brooke, before hitting her leg drop for the win. The slam was clearly botched, which led many fans on social media to worry about the status of Dana Brooke.

Nia Jax eliminating Dana Brooke from the #RoyalRumble before she even enters the match. #WWE #WWERaw

The good news is that according to PWInsider, Brooke is 100% fine, despite suffering through the bad bump. 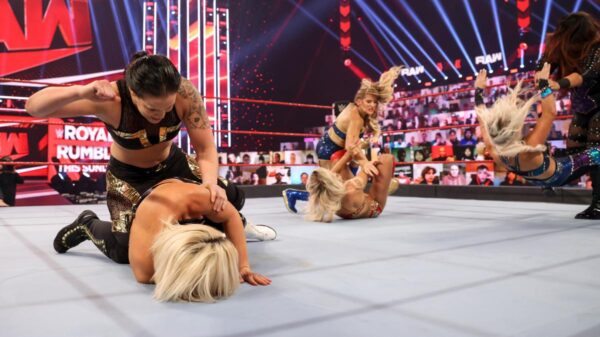 Way before Nia’s unsafe chokeslam on Dana Brooke, RAW fans were left a little puzzled during the six-woman tag match. In the middle of the bout, Shayna Baszler was counted out before the commercial break hit.

After the break, viewers witnessed Adam Pearce head to the ramp and declare that the match should resume. In all fairness, he did ask the live Thunderdome crowd if they wanted the bout to continue but didn’t really wait to hear a response before going through with it.

This had to be a botched finish… #WWE #WWERaw pic.twitter.com/glgRSsthHf

The entire match seemed off, and a tad choppy. Especially since it originally started as a singles bout between Charlotte Flair and Baszler.

It then escalated into a six-woman tag, only to have Shayna counted out. Many fans on social media did think it was odd that the match resumed for a third time, after the break.

According to the PWInsider, while Baszler legitimately got counted out by the referee, this wasn’t exactly part of the original script or “plan” for the match. Therefore, Pearce was asked to get on the ramp with a mic, improvise, and get the match back underway, which is exactly what he did!

While the segment seemed awkward, going “off script” happens more often than not when it comes to any live show or event. Especially Monday Night RAW (and SmackDown, too for that matter).