Conor McGregor wants a third bout with Dustin Poirier, and his coach is proposing the lightweight title should be on the line.

Although Conor McGregor has lost two of his last three fights, his coach is hoping the UFC books the star for a trilogy, title fight with Dustin Poirier. 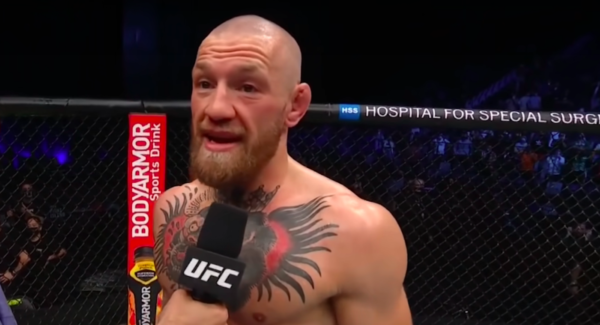 The massive star took on Dustin Poirier in the main event of UFC 257, in what many believed would see the winner advance to a title fight. Poirier made sure talk of a rematch between McGregor and Khabib Nurmagomedov ended, by finishing him in round two.

After the bout, McGregor relayed he wants to fight Poirier for the third time. McGregor stopped Poirier in their 2014 bout.

Well, since the devastating loss, McGregor’s coach John Kavanagh spoke with ESPN’s Ariel Helwani. While doing so, the coach reported this about McGregor’s wish for a third fight with Poirier (quotes via MMA Junkie).

“He’s already harassing everybody to get the rematch, so we would love to rematch. I don’t think Dustin is against that.

If we can get the rematch before summer, that would be amazing.

“If it’s not to be, then I guess I don’t really know. Maybe he (McGregor) drifts off into the boxing.

So if the MMA community could help me out here, get behind me, and pester the UFC to give him another fight sooner rather than later – so I don’t lose him to boxing for six months – I would appreciate it.”

And then, Kavanagh also had this to say about the 155 title, which is still, officially, held by the retired Khabib.

“I think the two of them are a beautiful matchup. Stylistically, it’s beautiful to watch.

I’d love to see lots and lots of rounds between the two of them. Dustin is obviously riding high with confidence now with more experience and more weight.

He took some of those shots. I’m sure his confidence is super high at the moment.

We have to fix that technique with the leg and a couple of other things, as well, but Dustin vs. Conor 3 for the belt in maybe May, that would be amazing.”

So, the fact Conor’s pushing for a trilogy fight with Dustin is no surprise. He made it clear after UFC 257 that is his hope.

Poirier has also said he’s open to the fight. But, would the UFC really put the belt on the line?

Heading into UFC 257, the consensus was that the Michael Chandler – Dan Hooker fight could also determine who fights for the belt next. Following Chandler’s big win, Dana White said Poirier – Chandler could be next.

Charles Oliveira, who has won eight in a row, is also in the mix.

So, from a meritocratic perspective, there’s no question others are ahead of Conor in the title shot race. Especially Oliveira.

But, if McGregor demands the belt be put on the line (and Kavanagh kind of alluded to an ultimatum in that respect), you never know.