Jose Aldo really needed a win today at UFC Vegas 17, and the legend did just that, by getting by the always game, Marlon Vera.

Jose Aldo wasn’t able to record a highlight reel victory to record his first win at bantamweight. But, the former featherweight champ did what he had to do to get past Marlon Vera. 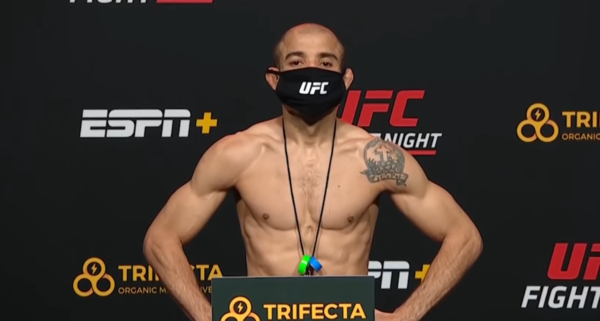 Vera came out firing a few kicks, and Aldo pressured. Aldo fired in a hard leg kick of his own. 90 seconds in, Vera clinched up and tried taking Aldo down. The latter eventually broke free and the striking resumed.

Aldo dug a hard left to the body and did so again moments later. Aldo fired a right to the solar plexus soon after. Aldo followed up with a hard leg kick. Vera tried clinching up again but Aldo shrugged him off.

Late in the round Vera threatened with a head kick but Aldo returned fire.

Aldo started the round with a nice combo. Vera pressured more early on in round two and fired in more kicks. Aldo winged some big hooks mid-round but Vera scored with a back fist not long after. Vera clinched up late in the round, but was unable to get Aldo down.

Vera planted a nice check hook and clinched up again. Vera scored with some knees to the legs of Aldo and the latter responded with knees of his own. Close fight.

Moments into the frame, Aldo clinched up and started looking for a takedown. In the ensuing scramble, Aldo took Vera’s back and the eventually they hit the floor. Aldo was still on the back of Vera and he hunted for a choke. Vera got back to his feet but Aldo remained on his back.

Vera tried slamming Aldo off but the legend maintained the position. In the last minute, Aldo continued to work from the back and Vera was unable to break loose.

Aldo was awarded two rounds by all three judges. As a result, the Brazilian star ended a three fight losing streak and recorded his first victory at 135.

Here are the complete results so far for UFC Vegas 17, which is going down at the Apex Facility.