Cejudo Says Moreno “Sucks”, But is Picking Him to Beat Champ Figueiredo

Henry Cejudo apparently doesn't think much of Deiveson Figueiredo or Brandon Moreno. But, he's picking the latter to win at UFC 256.

Buzz continues to build around Deiveson Figueiredo, following his quick win at UFC 255. But, evidently, Henry Cejudo isn’t all that impressed with the new flyweight champion.

In fact, the former champ-champ is predicting that Brandon Moreno will end his reign at UFC 256 next month. 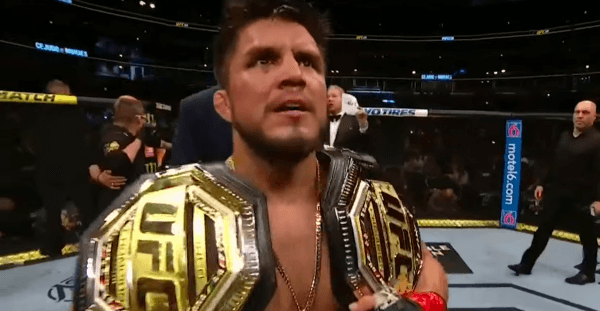 Cejudo says Figueiredo is the “lord of nothing”

Figueiredo has continued to turn heads in 2020. So much so, some observers believe if he beats Moreno on December 12th he’ll have a very strong case for ‘fighter of the year’.

The Brazilian fighter, who also goes by ‘The God of War’, has defeated Joseph Benavidez twice this year, who is one of the best flyweights ever. At UFC 255 last month, Figueiredo quickly submitted Alex Perez in what was his first title defense as the flyweight champ.

Well, recently Cejudo spoke with The Schmo. The former flyweight and bantamweight champ, who retired this past May, had this to say about the new champ (quotes via MMA Fighting).

“The only reason why Deiveson Figueiredo’s there is because of me,” Cejudo said. “To me, he’s the lord of nothing.

I’m the one that gave him that position. I’m allowing him to babysit my belt and he’s being a pretty good babysitter in my eyes.”

“I’m still a fan of the sport. I enjoy watching these guys but I think more than anything, I’m actually a critic,” Cejudo said while discussing his retirement. “Every time I watch the fights I just look at things the fighters are doing wrong and when I see that, even with Deiveson, this is why I think he’s gonna have a hard time and may potentially even lose to Brandon Moreno.

All you have to do with a guy like Deiveson Figueiredo is make him grapple for that first round because he’s cutting a lot of weight.

By the time that second, third round hits he’s gonna start having that heavy muscle. So I’m actually gonna pick Brandon Moreno – which, he sucks too – but I’m gonna pick him to beat Deiveson Figueiredo.”

Cejudo also had this to say, while discussing why he thinks Moreno will rule the day at UFC 256.

“It’s because he cuts a lot of weight and he’s gonna feel that,” Cejudo explained. “Remember, it’s not so much the weight, it’s the fatigue that comes in with losing that weight and I still think he’s a little old school with how he does it.

So if I was Brandon, I would capitalize on that. We’re gonna have a new flyweight champion. I do believe that Brandon is gonna beat him.

Plus, he used to train with me too, but he knows who the boss is.”

So, if you follow Cejudo, you won’t be surprised to see him taking pokes at Figueiredo or Moreno. After all, although Cejudo’s apparently retired, he continues to fire verbal shots at various fighters.

As far as his prediction: if Moreno can stay out of trouble against the ridiculously, dangerous Figueiredo in the opening rounds, his chances of winning will rise dramatically.