Tony Ferguson's made it clear he's not happy with how talks for his next bout are going, and now he's taken some verbal shots at Dana White.

It remains to be seen when and who Tony Ferguson will fight again. But, based off recent comments ‘El Cucuy’ made about UFC President Dana White, it sounds like the parties are pretty, pretty far apart on terms. 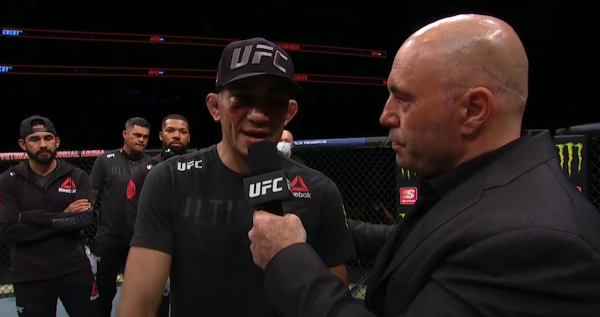 Over the years, for the most part, Ferguson and the UFC have appeared to have a solid relationship. But, in more recent weeks, things have gone off the rails on that front.

Following Ferguson’s loss to Justin Gaethje in May, it was reported the UFC was hoping to have ‘El Cucuy’ fight Dustin Poirier at UFC 254. Poirier relayed publicly that he wasn’t happy with the offer, and White seemed to imply Ferguson was.

The latter proceeded to back Poirier on his contractual demands and more recently, Ferguson has relayed he’s far from happy with how talks with the UFC are going.

Case in point, in a recent interview with MMA Junkie, Ferguson had this to say, while referencing a proposed bout with former Bellator champ, Michael Chandler.

“Chandler? Think about this: How many times are you going to put another (expletive) person in the (expletive) shuffle of the cards?” Ferguson asked.

“Dana keeps shuffling me down the list. What? Because I’m (expletive) Mexican? What’s up Dana, you don’t like Mexicans? You don’t like brown people? I’m not going to call you a racist, but what the (expletive), man?

What’d I do to you? Why do you treat me like (expletive)? My last name is Ferguson. I don’t want to get mad anymore.

I don’t. I’m not going to. But that being said, I said my piece. I’m too busy working.

“I’ve got (my manager) Lloyd (Pierson of VaynerSports) and them to work on my contracts. If they don’t want to get me a fight, then (expletive) it, dude.

I’m not going to (expletive) and moan. I’m going to keep working. People won’t buy their (expletive) pay-per-views, and then they’ll let their friends know.

Then their friends are going to let somebody else know, because when you don’t have a good time somewhere, they’re going to tell three more people.

It’s what I learned in the restaurant business. So listen. If you have a bad time somewhere, you’re going to (expletive) tell everybody.”

Ferguson didn’t stop there, however, as he also made the following accusation about White.

“A lot of these younger fighters, they don’t respect the fact (that) Chuck (Liddell) and Tito (Ortiz) and all those older guys – those are like my big brothers and my big uncles – they got treated like (expletive), too,” Ferguson said.

But I know one thing, I know the company, they are clutch. And so am I.

“All of us as the fighters at the UFC, I’ve been here for a very long time and these are some of the hardest (expletive) working people.

That work under pressure, the most clutch (people) and they get the (expletive) (expletive) done. I’ve witnessed it first (expletive) hand.

I love it. I love to be a part of it. That’s why I say there’s no conflict in this (expletive). I hire people for that stuff. Seriously, man. I love this (expletive) game. It’s so awesome, dude.”

So, it’s important to remember that there are two sides to every story, and White will very likely present his side soon. That said, Ferguson isn’t the only person to claim that the UFC hasn’t and isn’t, paying fighters what they’re worth.

Prior to losing to Gaethje, Ferguson was on one of the most impressive runs in the modern MMA era. ‘El Cucuy’ had won 12 straights bouts and his last loss was all the way back in 2012.