Anthony Smith’s Leg is “Not Good at All”, Following Aleksandar Rakic Fight

Anthony Smith took some heavy, heavy leg kicks in his loss to Aleksandar Rakic, and "Lionheart's" confirmed he sustained some serious damage.

It was obvious early on into the UFC Vegas 8 headliner that Anthony Smith was having some issues with his leg, on account of kicks from Aleksandar Rakic. Now, several days removed from the defeat, the light heavyweight’s confirmed his leg is in rough shape. 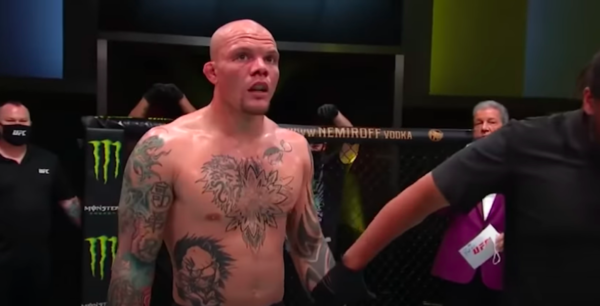 Smith says leg is “not good at all”

Rakic came out firing leg kicks right out of the gate in his August 29th bout with Smith, and scored with several. So much so, at one point, Smith stumbled to the floor after taking one.

Ultimately, Rakic largely relied on takedowns and his top game to win the fight via a clear-cut, decision win. But, recently Smith spoke with Sirius XM, and he reported that his leg did indeed, take some serious punishment (quotes via MMA Fighting).

“It’s not good. It’s not good at all,” Smith said. “I’m still on crutches so there’s that. If I’m being really honest with you guys, I’m not doing well.

I’m super disappointed. I couldn’t get out of bed on Sunday. They had to send people from the [UFC Performance Institute] to my hotel room to drug me up and put a bunch of anti-inflammatory creams and big compression ice machines.

It was like I had a whole f**king team in my room. It’s a little bit better today.

“There’s an occult fracture on my fibula head so that’s cool. It sounds bad but it’s not a huge deal actually. It’s 4 to 6 weeks it will be fine. But yeah, that’s how my leg is.”

Then, while discussing the impact the leg kicks had on the fight, Smith relayed this.

“Had I not had the leg damage, I would have changed my game plan and just said all right we’re just going to stand in this boxing range and we’re going to f**king go to town here.

“That’s the thing — he kicked me three times. That is nuts,” Smith said. “Hector Lombard kicked me 32 times in that fight. No issues. I walked through the airport the next day.

“Three kicks from Aleksandar Rakic and I’m on f**king crutches.”

What’s next for “Lionheart”?

Hopefully, Smith has a full and speedy recovery but provided that happens, it’s not clear when he’s thinking of fighting next.

After the loss, which was his second straight (he lost to Glover Teixeira earlier this year), Smith conceded that he needs to make some big changes.

Smith acknowledged that Rakic was much bigger and stronger than him, so he’s not sure if he needs to bulk up, or consider returning to middleweight. In other words, it could be a little while before we see the rugged contender back in the Octagon.