Jorge Masvidal Wants to Run it Back With Kamaru Usman, Immediately

Since UFC 251, there's been a lot of talk about who Jorge Masvidal will fight next. But, 'Gamebred's' made it clear he wants to fight Kamaru Usman again.

It remains to be seen who Jorge Masvidal fights next, following his loss to Kamaru Usman. But if ‘Gamebred’ gets his way, he”ll throw hands with the man who beat him at UFC 251. 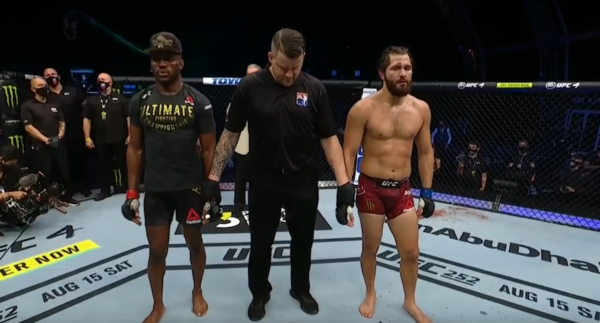 The 35-year-old veteran stepped up on approximately one week’s notice to fight Usman, after Gilbert Burns withdrew, as the result of contracting COVID-19. Although Masvidal had some moments early on in the fight, Usman took over with his wrestling and clinch game, and defeated ‘Gamebred’ by decision.

Well, since then, there’s been a lot of talk about who Masvidal will fight next. Due to how big of a star he’s become, there’s buzz about him fighting Conor McGregor or Nate Diaz again.

There’s also a lot of folks who would like to see him fight his former friend, turned rival, Colby Covington.

But, while talking to ESPN’s Ariel Helwani recently, Masvidal made it clear he wants to run it back with Usman (quotes via MMA Junkie).

“It’s a no-brainer,” Masvidal said. “Could they offer me bigger names that pay me more money? Yes. For a fact. But if it’s up to me, Usman.

Who else was actually like, ‘Hey, Masvidal didn’t do it, I’ll do it. I’m right here.’ So, if it’s up to me Usman right away. I don’t care if they can offer me a bigger fight or not, I would like to fight Usman.”

“….You could tell me (I’m fighting Conor) McGregor right now and will pay me X, Y, Z dollars: ‘The biggest pay-per-view event in history,’” Masvidal said.

“I feel I get compensated well enough now that I keep making the right decisions I’ve been doing, then this money is forever money. So it’s not about money.

It’s about I want that damn belt and I’m stubborn and I know I’m better than Usman and I want to prove it. I want to fight again.

I’m not going to take nothing from him. He won the first one. Let’s do it again and that’s it.

Then after that then whatever comes next after that. But Usman’s the thing I want the most. The immediate rematch with Usman.”

“Obviously I wasn’t at my best. When I got the call on six days I was on more in the gym on a general condition.

I was running, I was lifting weights. I wasn’t on the mats three, four times a week but my general priority was to get in better shape.

More long distance running and things like that. When I got the call we started training specifically for the fight and I did the best I can.

But I don’t want to make no excuses, I don’t want to take nothing away from Usman because even me on six days’ notice, fighting the world champion, I am a dangerous animal.”

So, it’s pretty impressive to see that Masvidal wants this rematch. Even before he took the bout on short notice, the consensus was that Usman’s wrestling would pose a problem for Masvidal.

Clearly he wants to put that narrative down.

But, as it stands right now, it’s hard to imagine Masvidal getting his wish. Since the fight didn’t feature many memorable exchanges, and was widely panned, the UFC probably doesn’t want to risk that happening again.