Darren Til only has one middleweight fight to date. But, the British star says he's only interested in a title shot, if he beats Robert Whittaker.

Darren Till has to get through Robert Whittaker at UFC Fight Island 3 first, but if he does, ‘The Gorilla’s’ made it clear he wants a title shot. 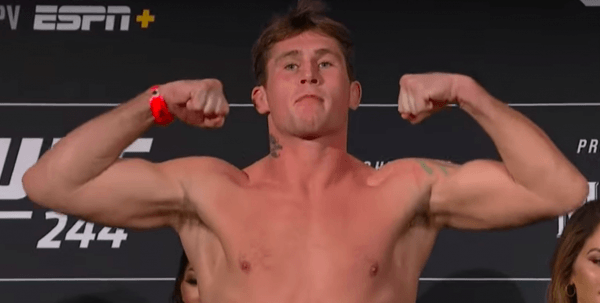 Till makes case for a title shot with win

Till is set to face the former middleweight champ in the headliner of Saturday’s card. The Liverpool star was tapped for the high stakes, big stage bout, after scoring a split decision win over Kelvin Gastelum last November.

That fight was the former welterweight contender’s first at 185 pounds.

Well, not surprisingly, Till has been asked about what he’s hoping for next, following UFC Fight Island 3. The 27-year-old says he’s not interested in anything other than fighting for the middleweight crown (quotes via MMA Fighting).

“Look at the two guys I’m fighting in my debuts at middleweight. Of course, I deserve a title shot.”

“I’ve never campaigned for [a title shot],” Till said. “Even when I beat Stephen Thompson in my hometown, I didn’t campaign for the title shot but I feel like the stars have aligned.

I beat [Kelvin] Gastelum easily, might I add, and he gave Adesanya the most trouble. Now Saturday I see myself beating Whittaker. I’m beating two of the best guys at middleweight.”

Till didn’t stop there, as the dangerous striker also expanded on why he won’t be looking to fight someone who’s ranked below him.

I’m not avoiding you and you’re not avoiding me but I’m looking forward. We’ll see what happens Saturday. I beat Whittaker, I don’t want to hear any other name come out of anyone’s mouth apart from Israel Adesanya.”

Although Till is still in the early days of his middleweight run, you can see where he’s coming from. Whittaker is ranked #1, so if he beats the former champ, his case for a title shot will be very strong.

Further, on paper, a fight between Till and either Adesanya or Paulo Costa has the makings of something special.

The other fighters ranked in the top five are Yoel Romero and Jared Cannonier. Romero just lost to Adesanya earlier this year, and he was also defeated by Costa last summer. So he’s not in the running.

Cannonier, however, has won three straight and he’s sitting in the #3 spot. In his last bout, he put away Jack Hermansson.

So, depending on how the Adesanya – Costa fight plays out, it’s certainly possible the UFC could table a title shot eliminator between the winner of Till – Whittaker and Cannonier.

Saturday’s UFC Fight Island 3 will take place in Abu Dhabi. Adesanya and Costa are expected to fight on September 19th at UFC 253.