Cody Garbrandt has battled many of the best bantamweights on the planet today. But, according to Sean O'Malley, "No Love" won't agree to face him next.

Both Cody Garbrandt and Sean O’Malley scored electrifying, knockout wins at UFC 250. But, if you’ve been thinking you’d like to see those two fight, well, according to O’Malley, “No Love” won’t sign-up. 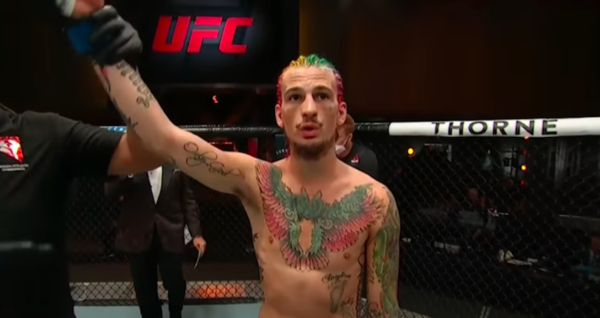 At UFC 250 on Saturday, Garbrandt ended a three-fight losing skid by taking out perennial, bantamweight contender Raphael Assuncao in round two. O’Malley, meanwhile, got the job done sooner, as he bombed out former WEC champ Eddie Wineland in the opening round.

Well, following O’Malley’s jaw-dropping win, he spoke with ESPN. When asked about how he thinks he’d do, if he threw hands with Garbrandt, “Sugar” said this (quotes via MMA Fighting).

“Yeah, absolutely. 100 percent. I feel like I’d knock Cody out,” O’Malley said. “I mean, he looked more improved Saturday, for sure. He looked like he was more calculated, more calm.

He looked very much improved from his previous getting knocked out three times. So, he did improve. I think he is high-level.

He’s a very, very dangerous opponent. Anyone that just throws bombs like that is dangerous. I feel like I’m calculated enough, accurate enough, and skill-wise enough to be able to knock him out. So that’s a win-win fight for me.”

And while talking about whether a bout with Garbrandt will materialize, however, O’Malley said this.

“One, he’s probably going to get knocked out and two he’s fighting someone that has a lot of hype, but if he beats me people will say, ‘oh you (should have),’ so it’s a lose-lose for him I feel like. I’m sure they’d avoid that fight.”

Could O’Malley be right?

Now, if you were to ask Garbrandt whether he’s too intimidated to fight O’Malley, of course, the answer would be no. After all, we’re talking about a guy who has faced the likes of Dominick Cruz, T.J. Dillashaw, Pedro Munhoz and now Assuncao.

Dillashaw and Cruz are widely considered to be two of the greatest bantamweights of all time.

But, if you were to ask Garbrandt, or more specifically, his management team, whether it makes sense for him to fight O’Malley next, the answer would also, probably be no.

While O’Malley has a ton of buzz behind him right now, prior to UFC 250, he wasn’t ranked in the top 15. Garbrandt just finished the #5 ranked Assuncao. So, “No Love” has a lot more to lose than to gain, by facing O’Malley.