Since Jon Jones was unable to secure a fight with Francis Ngannou, he's been blasting the UFC over his contract. According to Dominick Reyes, all of this is "Bones'" way of avoiding a rematch with "The Devastator".

Recently Jon Jones claimed he’s vacating the UFC’s light-heavyweight title, and he’s also said a high-paying super fight will be required to bring him back to the Octagon. But, according to the man who last fought Jones, Dominick Reyes, the real reason all of this is happening is because “Bones” is ducking him. 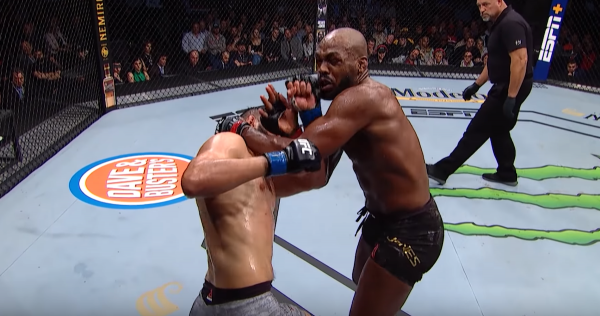 Ever since Reyes dropped a controversial, decision loss to Jones in February, he’s been calling for a rematch. The champion, however, didn’t sound overly interested, and eventually he campaigned for a fight with heavyweight contender, Francis Ngannou.

Talks for that fight quickly went nowhere, and ever since, Jones has been blasting the UFC over how much they’ve been paying him. Jones’ issues with the UFC,  alongside Jorge Masvidal’s, has spiked discussions over fighter pay.

But, while talking to Chael Sonnen recently, Reyes made the following claim about Jones’ actions (quotes via MMA Junkie).

“It was obvious man, that last fight was a dog fight and I took it to him,” Reyes said. “I pushed him to his limits. I pushed him somewhere he’s never been.

He’s not willing to lose his belt for less than whatever million dollars. He knows that belt is close to being lost, so he’s doing whatever he can to avoid fighting me again.

“He’ll go to heavyweight, ‘I’ll take my first loss at heavyweight, are you guys happy now? You saw me get knocked out by Ngannou,’ I think that’s kinda what he’s thinking.

Do everything he can to avoid that to keep his legacy, to keep his belt. Possibly go up to heavyweight and maybe beat Francis and now OK now I can make a run at the heavyweight title.”

Could Reyes be on to something?

Now, of course, Jones would likely scoff at the idea he’s ducking Reyes. Since their much discussed bout, Jones has argued there’s no question he won the fight (despite the fact, many people feel differently).

Could it be the case, however, that in reality, Jones is concerned about facing Reyes again? It’s possible.

In cases like this, when the champ has already defeated a challenger, clearly they have much more to lose than to gain by fighting them for a second time.

It’s also very likely, however, that Jones really wanted to enhance his legacy by taking out a feared slugger like Ngannou. When the UFC wasn’t willing to offer him more guaranteed money, it opened up a can of worms.