Although Anthony Smith has been feuding with Jon Jones once again, "Lionheart" insists he's not going to obsess over the light-heavyweight champ.

If Anthony Smith defeats Glover Teixeira tonight at UFC Jacksonville, he’ll take another step towards fighting for the light-heavyweight title again. But, despite his issues with champion Jon Jones, “Lionheart” isn’t getting hung up on facing “Bones” again. 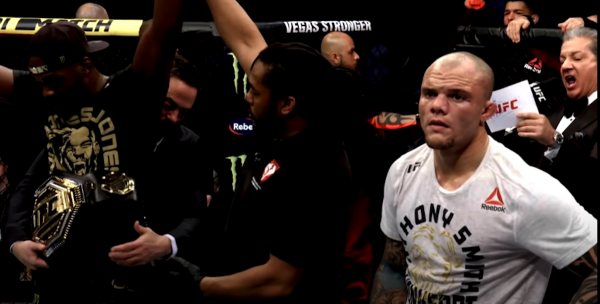 After winning three straight bouts, Smith locked up a fight with Jones last March at UFC 235. The champion worked his way to a decision win over the former middleweight.

Since then, Smith has made it clear he still thinks he can beat Jones. More recently, the two have been feuding once again, on account of Jones’ comments about Smith’s terrifying, home invasion incident.

But despite all this, Smith insists he’s not hung up on his issues with Jones. While talking to MMA Fighting recently, Smith said this about the champion.

“I’m not going to obsess over Jon Jones,” Smith said. “The one time that my mindset went from trying to impress myself and put in performances that I could be proud of, the one time that it didn’t and it became about proving everyone else wrong and it became more about what comes with the title was the time I got burned.

That was Jon Jones.

“If I’m on my game mentally, I don’t think anybody can beat me. But if things start to waiver a little bit, my mindset is in the wrong place, that’s where you’re going to screw yourself.

That’s really what I’m focused on. If I’m focused on me and doing what I want to do, and not getting wrapped up in all the other bullsh*t.”

These are interesting comments from Smith, and it sounds like his recent exchanges with Jones haven’t sidetracked his focus.

After all, right now, Dominick Reyes and Jan Blachowicz are the front runners for a bout with Jones. Smith needs to get by  Teixeira, who is one of the most experienced and dangerous fighters on the roster.

So who is Smith hoping to face next? In terms of a realistic option (as a rematch with Jones likely won’t happen anytime too soon).

While talking about his future, Smith said this.

“The Thiago Santos fight is the one I really want,” said Smith, who was stopped in the secound by Santos in 2018. “But those circumstances have to be right.

I think Thiago, myself and our management all agree on that scenario. It’s been talked internally between the four of us. Those circumstances have to be right.”

He head kicked me. I had him mounted. We laid next to each other fist bumping getting our faces stitched back together.”

It would be interesting to see Santos – Smith 2, no question. But, due to the fact Santos nearly defeated Jones last year, chances are he’s looking for a title shot eliminator next with either Reyes of Blachowicz.

If Smith defeats Teixeira tonight, who would you like to see him fight next?