Gilbert Burns has been dropping jaws since he moved up to welterweight. But, according to Stephen Thompson, "Durinho" is headed for trouble in his upcoming fight with Tyron Woodley.

Gilbert Burns has been making some serious noise, since he moved up from lightweight to the UFC’s welterweight division. But, it looks like Stephen Thompson’s pretty certain all that’s going to end, when “Durinho” throws hands with Tyron Woodley. 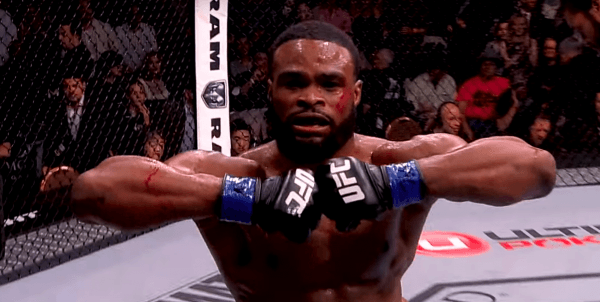 Burns has been tapped to fight the former welterweight champ on May 30th, at a UFC card, which appears set for Las Vegas.“Durinho” has secured the high profile and big stakes fight, after going 3-0 to date in the welterweight division.

Most recently, at the UFC’s March 14th card in Brasilia, Burns stopped longtime contender, Demian Maia in the first round.

So, what does Thompson think of the match-up? Who fought Woodley twice in 2016 and 2017? And battled the now former champ to a draw, before losing the rematch via decision?

Well, recently Thompson spoke with MMA Crazy, and he had this to say about the upcoming fight (quotes via MMA Mania).

“I think it’s a better fight for Tyron, for sure,” Thompson said. “I think Tyron’s got the better striking, I think he’s got the heavier hands.

I think Tyron’s gonna go out there and piece him up, because the guy is re-motivated.

I saw him during his last camp and I actually chatted with him and we did an Instagram Live together and the guy is motivated.

That’s a guy I would not want to stand up against in this next up-and-coming fight.”

It should be noted that others, like Woodley’s longtime coach, Duke Roufus, has said Woodley’s striking has reached new levels.

Burns’s stand-up has improved significantly in recent years. But, if does take some big shots from Woodley early, it will be really interesting to see if he can take the fight down.

The Brazilian fighter is a highly decorated, jiu-jitsu competitor. But, will he be able to get Woodley to the floor? A former NCAA Division 1 All-American wrestler?

It should be noted that not long ago, in March, Burns argued that Woodley is not the force he used to be. While speaking with MMA Junkie, the surging fighter said this about Woodley.

“The guy used to be a beast, he looked scary, but who’s that guy?” Burns said. “He doesn’t look like that anymore.

Last time we saw him in the octagon, he didn’t look like that. He looks bad. Even his corner was like, ‘Bite that mouthpiece and move forward,’ and he was still waiting for Usman; he was just broke.

“And that’s Tyron Woodley right now. He has so much distraction in his life right now with TMZ, rapping, acting, the whole thing.

I think he’s just surrounded himself with egos and famous people. He’s changed, I believe he’s not the same anymore.

We shall see what happens at the end of the month. If Burns can score a victory though, he’ll be knocking on the title shot door.