WWE Intercontinental Champion Sami Zayn is off TV due to concerns over COVID-19. Also, 205 Live might finally being cancelled.

Missing from action due to COVID-19 concerns is Sami Zayn and 205 Live might finally be done.

Sami Zayn Out Over COVID-19 Concerns

Not much has happened lately on WWE TV as COVID-19 has dramatically changed everything. Also missing is Intercontinental Champion Sami Zayn.

Apparently, Zayn was scheduled to appear on last week’s SmackDown. According to the Wrestling Observer Newsletter, he opted not to work over COVID-19 concerns.

In the report, it did not mention if Zayn was ill. He could be practicing social distancing and choosing not to work.

WWE is not forcing their employees to work if they are concerned. As of now, all wrestling is coming from the Performance Center in Florida.

Over safety concerns, WWE screens anyone before they enter the building. If there is an issue, the person is told to leave and does not enter.

Inside the Performance Center, WWE is making everyone wear mask. Also, they are constantly cleaning the ring and anything within distance.

The timing is not the best for Zayn. He returned a year ago  following double shoulder surgery.

He seemed set for a push upon return, but was quickly made into the mouthpiece for Shinsuke Nakamura. Later, he formed a stable by adding Cesaro to the group.

At the Elimination Chamber, Zayn won his first title under the WWE name. In a handicap match, he was able to defeat Braun Strowman.

Zayn would then start a program with Daniel Bryan. At WrestleMania 36, Zayn defeated Bryan to keep the title.

That was just under 30 days ago and Zayn is yet to appear on TV. There is always the possibility that WWE could strip him of the title.

It will be inserting to see when Zayn returns to TV. WWE plans to tape their next set of shows on May 11. 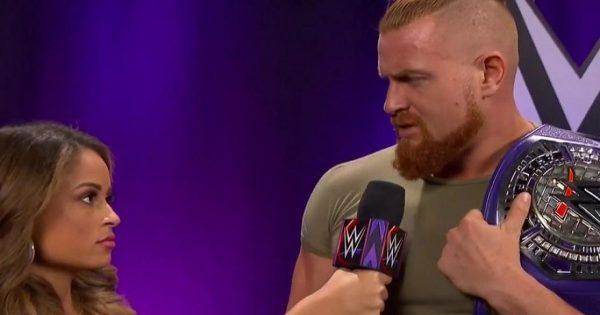 If anyone has checked the ratings, RAW, NXT and SmackDown are not doing well. The numbers started to plummet due to COVID-19 and they have not improved.

With everything going on, people have forgotten about 205 Live. Remember, it is that branded dedicated to the Cruiserweight division.

Lately, there has been no new content filmed for 205 Live. Instead, WWE has been airing highlights from previous episodes.

Inside the Wrestling Observer Newsletter, they mentioned how the brand was basically over.

“Once again they didn’t tape anything for 205 Live. Makes sense to just do clips shows. It’s only for WWE Network and few watch it anyway. It’s pretty much dead given the cruiserweight title tournament is on NXT and not on 205 Live.”

At first, Vince McMahon was taking a hands-on approach with the brand. Then, Triple H was placed in charge and now it seems like nobody cares.

Recently, WWE moved the Cruiserweight Championship to NXT. With the switch, also came more airtime for the person holding the belt.

NXT UK’s Jordan Devlin was the most recent champion. Although, he was been forced to vacate the title as he is unable to travel to the United States.

Been watching the #nxtINTERIMcruiserweight Championship tourney & I’ve gotta say, some great heart on display. Lads fighting for their professional lives.

Who will be crowned the ultimate sham? Who’s gonna want the REAL Cruiserweight Champ to sign their replica title? #WWENXT

Devlin has been very vocal about how WWE is handling the matter. Currently, a tournament is taking place with the winner claiming the gold.