Pedro Munhoz understands that Frankie Edgar is one of the greatest fighters to date. But, the bantamweight contender believes the former champ's looking to avoid him in the Octagon.

It remains to be seen who Frankie Edgar will face in his bantamweight debut, and while Pedro Munhoz is calling for the match-up, he doesn’t sound confident it will happen. 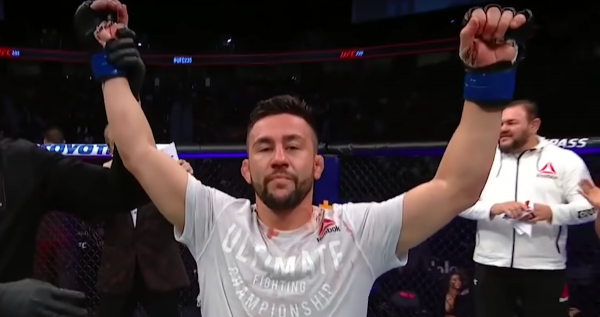 Munhoz argues Edgar is “ducking” him

Edgar was supposed to fight Cory Sandhagen in his first bout at 135 pounds this past January. But when Brian Ortega was forced out of a December fight with Chan Sung Jung, Edgar agreed to fight the featherweight contender.

Since Edgar was taken out by “The Korean Zombie” in the bout, however, he was unable to face Sandhagen.

As it stands right now, after several UFC card were postponed due to the coroanvirus pandemic, it’s not clear who and when Edgar will fight next. We do know that Edgar is still planning to drop down to bantamweight.

Well, recently Munhoz spoke with MMA Fighting, and he referenced the fact that Edgar has said he’s interested in fighting Aljamain Sterling. The comments surprised Munhoz, since according to him, talks were underway for him and Edgar to throw down.

“What I got from the conversation (with the UFC) is that the fight was on,” Munhoz said. “We were discussing this weeks ago, even before this pandemic, but what surprised me was him saying in this interview that he was ready to fight in June and the fight that would make sense would be Aljamain Sterling.

“We were discussing date and location. But the way he did, simply talking about another guy… I don’t know how this message was delivered to him, but the message I got was that this fight was pretty much done verbally.

I was training, the way I could, to fight him. When I saw this interview, I thought he was dodging me.”

There’s no denying that Munhoz is ridiculously dangerous. Case in point, before losing to Sterling in June, he had won three straight and six of Munhoz’s eight UFC wins have been finishes.

But, when you consider Edgar’s abilities and who he’s fought, it’s hard to imagine that he’s ducking Munhoz due to a lack of confidence. Sterling is ranked #2 and Munhoz is #7. So Edgar has much more to gain by fighting Sterling.

The ducking claim aside, Munhoz clearly has enormous respect for Edgar, as he had this to say about the former lightweight champ.

“It would be an exciting fight,” Munhoz said. “Frankie Edgar is a complete fighter, a black belt in jiu-jitsu, crisp boxing, great wrestling, impressive takedown defense.

It would be like fighting a living legend of the sport, someone I’ve always watched since I started training. It would be awesome.”

Ya. It’s a match-up that definitely has a lot of potential on paper. It just remains to be seen if it happens.