Frankie Edgar recently reported that he was "definitely depressed", following his loss to Chan Sung Jung last month. But, the legendary fighter is still planning to make a run at 135 in 2020.

Following Frankie Edgar’s devastating loss to Chan Sung Jung at UFC Busan last month, there was speculation about what’s next for the 38-year-old legend. But, it seems pretty clear that the former champ’s still confident in his abilities to compete with the sport’s best, as he still intends to make a run at 135. 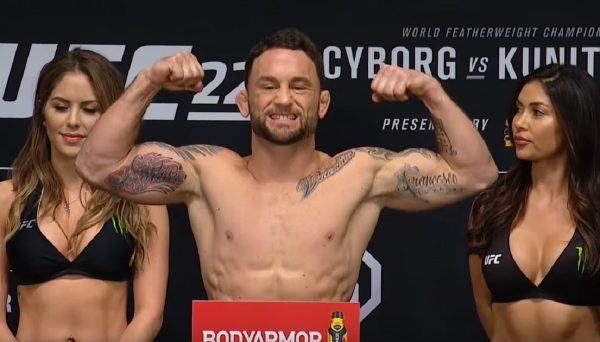 Edgar reflects on loss to “The Korean Zombie”

After Edgar lost via decision to now-former featherweight champ Max Holloway last July, the New Jersey star announced he was dropping to bantamweight. Edgar was booked to fight rising 135’er Cory Sandhagen on January 25th. But, when featherweight Brian Ortega went down with a knee injury, “The Answer” agreed to face Jung at UFC Busan.

Well, Jung proceeded to put Edgar away with strikes in the opening round, and since then, we haven’t heard much from the legend. But, recently Edgar spoke with MMA Fighting, and he had this to say about the loss:

“It was something I did,” Edgar said . “You can’t go back and dwell on sh*t you can’t change anyways. No regrets for me.

“Obviously, I wanted a different outcome, but I took the opportunity. It didn’t go my way. Sh*t happens, but those are the breaks. I was definitely depressed for a little bit, a little down on myself, but you move on. What else are you going to do?”

“He caught me with a good shot,” he said. “I’m sure I’ll look at it and I’ll be a little critical of something I did, but he’s on a tear,” Edgar said. “He’s been putting dudes away for a long time…”

If you’ve followed Edgar over the years, you know this is the norm for the classy fighter. It’s also worth noting that in the past, Edgar has typically bounced back from defeats. That said, the renowned fighter is 38 now, and he’s lost three of his last four.

Well, after Edgar lost to Holloway he understood the need to make a change, and that’s indeed still the plan. While talking about what’s going to be next for him, Edgar said the following:

“I’m going to go down to bantamweight,” Edgar said. “That was the whole plan before this obviously. The cards have been stacked against me my whole career being the smaller guy. Going out there and fighting in Korea on short notice, that kind of stacked the cards even more.

“I think what I need to do is put myself in a favorable position to win my next fight, and that’s at 135.”

So, it will be interesting to see how Edgar looks at bantamweight and whether he can make some waves in the division. Edgar also confirmed that he broke his orbital bone in the Jung fight, so he likely won’t be fighting for a little while yet.