Parents of Christian teens who wed after learning 18-year-old Chase Smith has cancer and only months to live call the couple a "Hallmark love story".

High school seniors Chase Smith and Sadie Mills knew marriage was in their future. But, that future was put on fast forward when Chase’s childhood cancer came back in an aggressive form, leaving him with only months left to live. This young Christian couple shares a deep connection their parents say is worthy of a Hallmark love story.

Those familiar with Jeremy Camp’s I Still Believe and Nicholas Sparks’ A Walk To Remember will recognize this special spiritual connection in people so young. You can just feel the love in the teens’ wedding video below.

Chase was a nationally ranked swimmer with Olympic ambitions and Sadie is an elite diver. The two attended different high schools but met because of their love of the pool. They began dating just six months ago yet their bond was both instantaneous and deep.

The teens’ faith in Jesus made their bond even closer. Their parents recognized that was this was not a typical teen romance. Their love story was a gift and something very special.

“He was so sweet. He’s very polite. He’s a good Christian boy,” Sadie said. “We just fell in love with each other’s personalities. Now, he is all that matters to me.”

These teens experienced a deep love that many people two- and three- times their age never have, so together they made the decision to marry their final semester of high school.

When Chase was 12 in 2014, he was diagnosed with Ewing’s sarcoma. It started with a cramp in his thigh at a national swim meet. Tests were done when the pain intensified.

Doctors found a tumor on the young man’s femur. Chemotherapy allowed him to overcome it, but then another tumor appeared in the same spot in 2016.

Last April, the teen found out his cancer was back. Doctors found a tumor the size of his heart on Chase’s lung. He was doing well and enjoying his final year of high school with Sadie when the Ewing’s sarcoma came back with a fierce intensity.

Now, the tumors were all over his body and he was given months to live.

A love story for the ages.
Months to live, Chase wrapped Sadie in his arms and said 'I do.' And now they pray…as the tumors ravage his body. https://t.co/ygBImzJY3U via @indystar

The day Chase Smith learned the devastating news, his dad wanted to put his mind at ease. Brad and Kelli Smith believed their son wanted to marry Sadie and if he wanted to do it now, they supported the decision.

“He said, ‘I can tell in your demeanor that you’re going to marry Sadie one day,'” Chase remembered. “‘I want you to know if that’s going through your mind right now, your mom and I support you 110 percent.”

RELATED: Couple Marries the Day Before the Groom Passes Away From Cancer

Chase Smith And Sadie Mills Put Their Trust In God

That is indeed what Chase was thinking. So, he decided to approach Sadie about it. That’s when they both say they had a “God moment.”

“I know exactly what you’re going to say,” Sadie told Chase. “I wanted to tell you the same thing tonight.”

The two families got together to discuss the prospect of an immediate wedding for these high school seniors.

“I told them how much Sadie had changed my life and how much I loved her, how special she had been to me, the simple fact that there is nobody I’ve been able to open up about my personal life and cancer journey like I’m able to with her,” Chase said.

“She is able to calm me down in a lot of scenarios when nobody else can.”

“He felt like that was both of our purposes in life,” Chase said. “To share our love story and show people how much is possible through God.”

With everyone in agreement, there wasn’t time to waste. The wedding came together in just four days. These teens would profess their eternal love before God.

Before they walked down the aisle, the couple met at a corner to hold hands and pray. Neither could see each other as they didn’t want to spoil the big reveal, but the Christian couple was there together. And God was too. 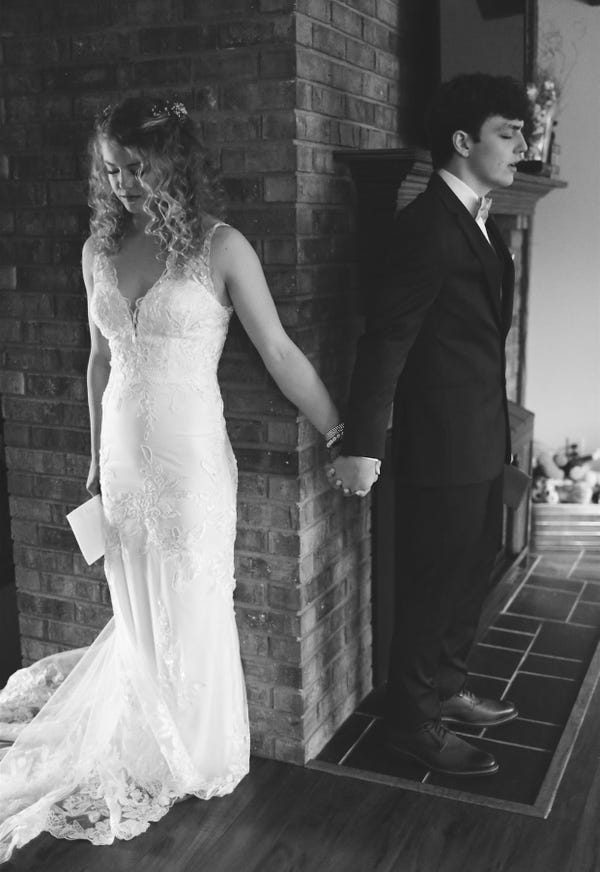 After they said their vows and kissed, the Smiths triumphantly raised their hands together to celebrate. They don’t want to dwell on the fact that they might only have three months after husband and wife. They have a life to lead.

“The most important thing in my world at this point is spending time loving and laughing,” Chase said. “Just living life to the fullest and loving every moment.”

“This is like a Hallmark love story,” Kelli Smith, Chase’s mom said. “A Nicholas Sparks love story. You just don’t see love like this.”

Chase Smith and Sadie’s wedding video can be watched below. This is a unique and powerful love that is evident to everyone around them.

The difference here is that this is real life and not Hallmark fiction. This love, the pain, and the power of faith are very real.

Please join us in sharing this teen Christian couple’s love story and lift them up in prayer.