Dana White Confirms UFC’s Next Three Cards Have Been Postponed

Dana White said only a government shutdown would stop the UFC from holding it's next three events, and now he's announced the next three cards have been postponed.

The UFC was one of the few, remaining big stage, sports organizations still planning to hold events in the short term future. But, as some people predicted would be the case, the promotion’s been forced to postpone three upcoming events. 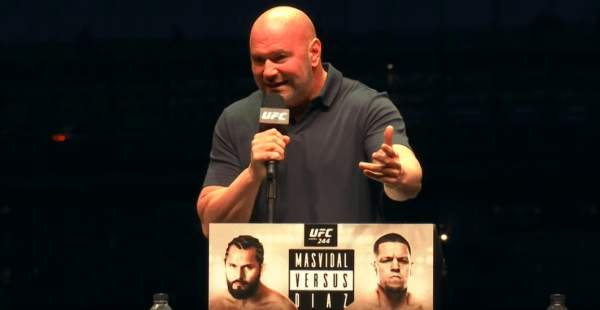 When jurisdictions started temporarily banning large public gatherings on account of the coronavirus, Dana White told fans that the UFC would find a way to still hold events and broadcast them. But, since White’s initial proclamation, travel bans have been imposed and even stricter rules on public gatherings have been enacted.

On Monday, it was reported that White sent out an email to UFC employees, announcing the promotion’s March 21st, March 28th and April 11th cards have been postponed (quote via ESPN):

“As you’ve heard me say, I’ve been in the fight game for 20 years, and this is what we do — we find a way to keep our events going no matter what,” White wrote in the email. “But this is different. The whole world is being affected right now, and nothing is more important than the health and safety of you and your families.”

White still hopes to have Khabib Nurmagomedov vs. Tony Ferguson

Now, the fact the UFC has had to postpone the cards shouldn’t come as a surprise, in the wake of the additional restrictions that have been enacted. Further, there’s the need to keep the fighters, their coaches, family members and friends healthy. As well as the officials and UFC staff.

All that said, in a follow-up interview with ESPN, White says they’re still going to hold the April 18th bout between Khabib Nurmagomedov and Tony Ferguson. White hopes the pandemic will have slowed by then and says they will hold the fight outside the U.S. if need be. As it stands right now, however, it wouldn’t be shocking if that bout also gets postponed.