Dominick Reyes failed to end Jon Jones' reign last night at UFC 247. But after his controversial loss, Dana White says the challenger looked like the "future" of the light-heavyweight division.

Dominick Reyes wasn’t a household name prior to UFC 247. But, following his memorable and impressive performance against Jon Jones, it sounds like Dana White believes all that’s going to change. 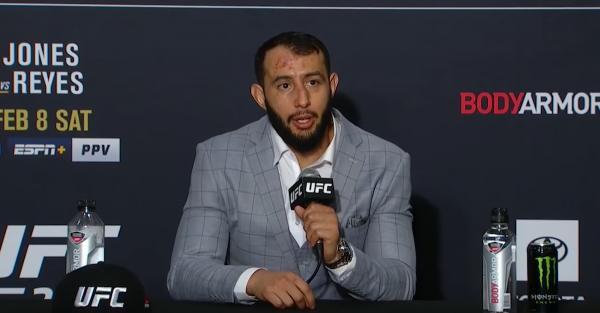 If you didn’t catch UFC 247 on Saturday, chances are by now, you’ve heard that Jones got by Reyes via a unanimous decision score. But, as you’ve also likely heard, that decision is being scrutinized and criticized.

Reyes appeared to out strike Jones in the first three rounds. While Jones got the better of the challenger in rounds four and five, and scored a couple of takedowns, it looks like many believe Reyes won three rounds to two.

Although Reyes didn’t officially, pull off the upset, his stock is almost certainly going to rocket up. Case in point, while talking about Reyes after UFC 247, White said this (quote via MMA Junkie):

“Absolutely, Dominick Reyes tonight looked like the future of the division,” White said. “He looked damn good. Again, Jon Jones has these expectations on him because of who he is and what he’s accomplished. Jon Jones went in there against a very, very, very tough guy tonight. Jon found a way to win.”

“Coming into this fight … the only problem with this fight was the general public didn’t realize how dangerous this guy really is and the huge threat he is to Jon Jones,” White said. “He was a 4.5-to-1 (underdog), which is crazy. There’s no way that guy is a 4.5-to-1 underdog. You saw it tonight.”

If Jones and Reyes fight again, one thing is certain, the odds are going to be dramatically different. Leading into the event, some people predicted that Reyes could test Jones on account of his power and athleticism. But, the consensus was that Jones’ comprehensive game would rule the day.

How did White score it?

And how did White score the headliner? During the post-fight presser the UFC President said this (quote via MMA Junkie):

“The scoring was all over the map,” White said. “… Going into the last round, I had Dominick Reyes 3-1 going to the last round. My kids are terrorizing me that the fix is in, ‘How could this happen, Dad?, Reyes won that fight,’ and the list goes on and on of people who are reaching out to me. So it’s not like there’s this landslide of people saying it was a robbery or whatever. People have it all over the place.

“But the reality is, who gives a sh*t? We’re not judges. None of us are judges, the judges called the fight, and that’s that.”

It is interesting to see that White scored it for Reyes. Following Jones’ razor thin, split decision win over Thiago Santos in July, White relayed he scored it for Jones.

UFC Heads Back To Fight Island With Israel Adesanya-Paulo Costa