Tyson Fury has talked about taking a MMA fight, but it looks like before that happens, the boxing star wants to throw hands in a modified rules bout.

Tyson Fury made headlines last fall when he said he was hoping to fight in a MMA bout soon, and then the boxing star spent some time training with UFC middleweight Darren Till. But, as the heavyweight champ prepares for his rematch with Deontay Wilder next month on February 22nd, Fury’s relayed he wants to take a modified rules bout after that. 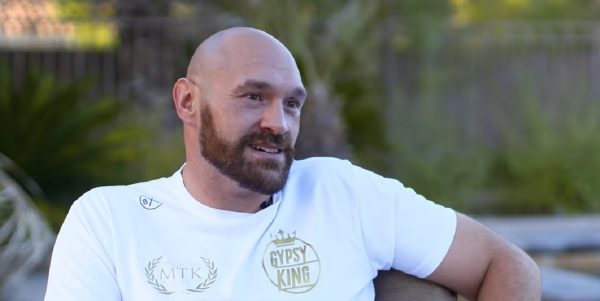 When Fury initially said he planned to take a MMA fight, the comments were met with skepticism by many. Primarily because there’s some massive bouts in boxing for Fury right now. One of which being his upcoming rematch with Wilder. Another huge fight out there for Fury would be a scrap with Anthony Joshua.

Then, of course, there’s just the fact that Fury would have to train in wrestling, kickboxing and jiu-jitsu etc. to prepare for a MMA fight. So, in other words, he would need to put his boxing career on hold, and he would also have to risk taking a big loss.

Well, more recently Fury spoke with ESPN Radio, and while discussing his ambitions for other types of fights, the star said this (quotes via Bloody Elbow):

“I don’t want to go into an MMA fight, rolling around the floor and all that, no. But I would fight one of their champions in small gloves,” Fury told ESPN Radio. Maybe in a cage, but with boxing rules. I think that would be very interesting. … With UFC gloves, the little 4-ounce gloves, that would be good for me.

”After I beat Deontay Wilder next month, I’m going to have a sit-down with Dana [White] and we’re going to go for it, run some numbers and see if the fight makes sense. Whoever’s available from that side, and whoever’s willing to get their ass kicked in the cage by the heavyweight champion of the world, he’s the one I want.”

So, it’s not surprising really to hear Fury’s comments above. Obviously a boxing match with 4-ounce gloves, whether it’s in a cage or not, is more fitting for his skill set. But, it’s hard to imagine the UFC going this route. The promotion doesn’t hold modified rules fights, unlike say, ONE Championship, which also has stand-up bouts where the fighters wear MMA gloves.

Now, White is planning to launch his boxing promotion, so could something be worked out there? Maybe. But, it still seems unlikely.

Fury (29-0-1) is coming off a decision win over Otto Wallin in September, 2019. In his first bout with Wilder in December, 2018, the heavyweights battled to a draw.