Bellator's middleweight champ Rafael Lovato Jr. has revealed that remarkable run in mixed-martial-arts could be over, following the revelation he has a brain condition.

After going undefeated in his first 10, professional MMA fights and winning Bellator’s middleweight title, sadly, there’s a chance that Rafael Lovato Jr. will not fight again. 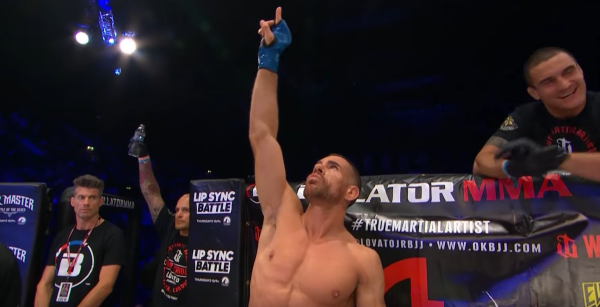 The decorated grappler has yet to fight since he defeated Gegard Mousasi last June to win Bellator’s 185 crown. That victory was Lovato Jr.’s fifth with Bellator, since he joined the promotion in 2017.

This week the 36-year-old fighter appeared on Joe Rogan’s podcast.

During the show, Lovato Jr. revealed that he’s been diagnosed with cavernomas, which according to Mount Sinai is an “abnormal clusters of vessels with small bubbles (or caverns) filled with blood that make them look like a berry. These can range in size from microscopic up to several inches in diameter.” Often the condition is present at birth.

While reflecting on the first time he was told about his condition, Lovato Jr. told Rogan this (quote via MMA Junkie):

“…The radiologist, with really no candor or an easy or soft way of saying it, was like, ‘Dude, have you seen your brain before? There’s some stuff in here you need to see.’ He pulls me into the room and shows me on the screen, pointing out what looked like little balls. It looked like something was wrong – not a normal scan. But I don’t know – like shades of discoloration. You could see that it wasn’t normal. He didn’t even know what it was at the time.”

Lovato Jr. initially was told he should not fight again, but a doctor in Brazil ruled that he could continue to fight for now, and the champion was planning to rematch Mousasi this past weekend at Bellator 238. Ultimately, however, other physicians disagreed and the California Commission did not clear him to compete.

So, as it stands right now, Lovato Jr.’s future is up in the air. While talking about where his fighting career stands, the talented fighter said this:

“I’m not officially retiring. I am indefinitely on the sidelines right now,” Lovato said. “I am actively seeing more doctors and working toward learning more about this. Obviously I want to keep fighting. I still have hope that if I can continue to still see more doctors and get more knowledge.

“This is such a rare and unique thing. No one knows too much. I’m getting some people saying, ‘No. No way.’ Then I’ve got these other specialists and people who have dealt with it that go, ‘Yeah, it’s OK.’ It’s indefinite.”

The fourth degree, Brazilian Jiu-Jitsu black belt went on to say that if it’s determined it’s unsafe for him to fight, he will move forward with his life. Obviously this is very unfortunate news for Lovato Jr. and Bellator. Here’s hoping some sort of treatment can be found, which will allow him to continue with his career.

Lovato Jr. is reportedly scheduled to compete in a jiu-jitsu match on February 21st.