Footage of a very heated staredown between Dan Hooker and Paul Felder recently fired around the internet, and the latter says the intensity behind it was all real.

Combat sports fans know that fighters sometimes / often play up the intensity for promotional purposes, when facing off with their respective opponents for cameras. But, Paul Felder’s reporting that a recent, extremely intense staredown he had with Dan Hooker was all real. 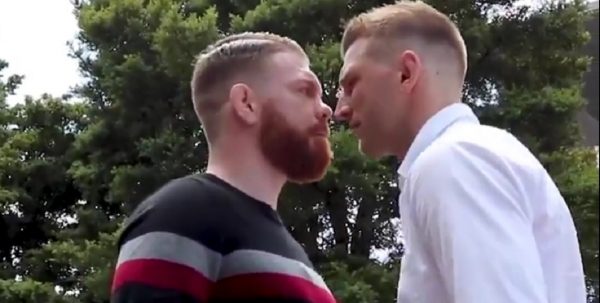 Felder is booked to fight Hooker in the latter’s homecity of Auckland, New Zealand on February 22nd. The lightweight fight is going to headliner the event.

Well, recently Felder headed to New Zealand to promote the fight, and at a media event, he had a pretty heated and lengthy faceoff with Hooker. While talking to MMA Junkie recently about the exchange, Felder had this to say:

“As far as intensity, that was real,” Felder said. “I went down to New Zealand expecting a little bit of that from Dan because of how we interacted on social media. We kind of went back-to-forth a little bit. But that’s what it’s all about. We’re two guys that are trying to rally for a title shot after this one. We’re in each other’s way. That’s how it should be, that’s how it’s supposed to be when you’ve got a five-round main event with a guy.

“I’m invading into his country. My whole plan is to knock his ass out in front of all his friends and family and take that money and get out of there and go on to a title shot.”

Fair enough right? It is a big fight for both men, no question. But for Hooker, there’s likely a pretty massive spotlight on him, since he’s going to be representing New Zealand in the main event.

Felder says heat is nothing personal

But does Felder genuinely dislike Hooker? While discussing how he feels about the lightweight, “The Irish Dragon” said this:

“We got some bad blood right now,” Felder said. “Obviously I’m trying to hurt this man. He’s trying to hurt me. But I respect his skillset, I know what he offers…”

There’s a lot to like about this fight from style and skills perspective. But, the fact there seems to be a respectful rivalry blooming as well, doesn’t hurt either.

Hooker (19-8), meanwhile, is looking for his third straight win as well, following victories over Vick and Al Iaquinta. Prior to those wins, “The Hangman” was stopped by Barboza last December.

UFC Auckland will be hosted by the city’s Spark Arena.