Jairzinho Rozenstruik Says he Can KO Francis Ngannou “For Sure”

After recording his fourth stoppage win in the Octagon, Jairzinho Rozenstruik has no doubts that he can also take out Francis Ngannou.

Francis Ngannou is widely recognized as one of the most dangerous fighters in the game. But, Jairzinho Rozenstruik has no doubts that if he gets his wish, and faces Ngannou, he can put away the feared slugger. 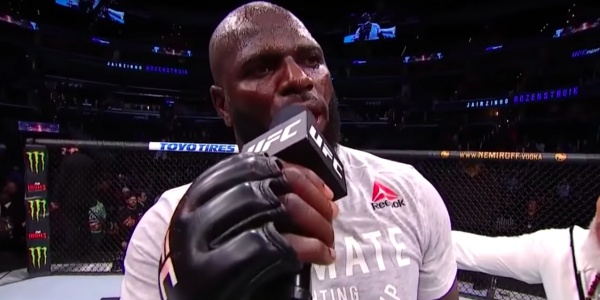 After Rozenstruik took out Alistair Overeem at UFC DC, with late, come from behind win, he called for a bout with Ngannou. That prompted the follow response from “The Predator”.

I heard you babayga. You made yourself very clear tonight. Congrats on your come back by the way.

I heard you babayga. You made yourself very clear tonight. Congrats on your come back by the way.#uncrowndedchamp ☝️#UFCDC

When asked to comment on Ngannou’s response, while talking to the media, Rozenstruik said this (quote via MMA Fighting):

“I like it,” Rozenstruik said. “If he accepts, I’m excited about it. I’m going to see him soon then.”

Will the experienced kickboxer, however, see Ngannou “soon”? It’s hard to say. On one hand, Ngannou has been actively seeking a fight and has made it clear he wants to compete right away. So, it could depend on how soon Rozenstruik is able to fight again. Since Rozenstruik also fought in November, when he quickly put away Andrei Arlovski, he may need some time to rest up.

The bout could also hinge on where Rozenstruik winds up in the ranks, as a result of his win over Overeem. Prior to this weekend’s card he was ranked #14 in the heavyweight division and the “Reem” was #6. Ngannou, meanwhile, is #2.

Rozenstruik has no doubt he can KO Ngannou

Rozenstruik was also asked about whether he’s confident he can take out Ngannou, if and when they fight. The 31-year-old striker said this:

“I think it’s going to be a really good fight,” Rozenstruik said. “I mean he’s strong, he’s big. Even when I’m going to look at him like you’re big, you’re scary but we have to do it.

Yup. While there’s no question Ngannou can take out anyone on the planet with his heavy, heavy hands, Rozenstruik has demonstrated one-and-done power too. Rozenstruik has finished all four opponents he’s faced to date in the UFC, and he also recorded 64 knockouts in his kickboxing run. So, it’s not surprising to hear him say the above.

If Rozenstruik ends up facing Ngannou, how long will the fight go?