Bellator 237: “Rampage” Jackson “Felt Like a Hippopotamus” in Loss to Fedor Emelianenko

"Rampage" Jackson turned heads by coming in at 265 pounds for his bout with Fedor Emelianenko on Saturday, and following his loss, the star reported his run at heavyweight is over.

“Rampage” Jackson doesn’t want to take anything away from Fedor Emelianenko’s win he scored at Bellator 237. But, the former UFC light-heavyweight champ admitted after his quick loss on Saturday that his weight played a role in his defeat. 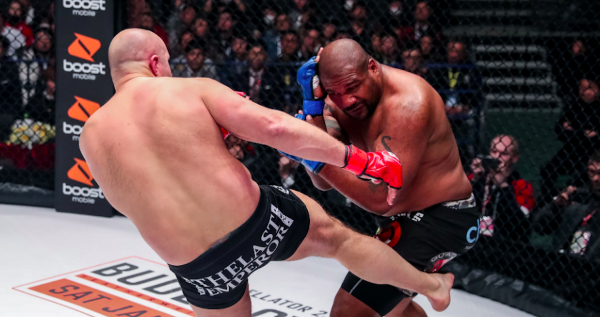 When it was announced that Jackson was going to face Emelianenko in a heavyweight bout, no one was surprised, as “Rampage” has competed at heavyweight before. But, when the decorated fighter came in at 265 pounds for the bout, compared to Fedor’s 240.5, that may have raised some alarms.

Well, if you saw the bout on Saturday, you know that Fedor was the quicker fighter and that he peppered Jackson with shots right out of the gate. Then, as the third minute of the fight neared, Fedor finished the deal with an overhand right that put Jackson on the deck.

According to a report from MMA Junkie, Jackson shared out the statement below afterward on Instagram (the statement appears to have been taken down since).

“Sorry guys we didn’t get the outcome we wanted, but you know what, I knew one of us was going to get knocked out,” Jackson said. “But I didn’t know it was going to be (expletive) me. But you know what? I ain’t mad, though. You win some, you lose some. You get paid for all. Y’all remember that.”

“It’s all good – I’m not in a bad mood,” Jackson said. “I just know what I got to do. I got to get my damn weight down. I felt like a hippopotamus out there. But that’s my fault. No excuses. It’s all right. I’ll be back. But I ain’t coming back at heavyweight. I’ve got to lose this weight.”

When that bag secured and the ladies waiting back in the room 😂💀🤦🏾‍♂️ @MKingRingo @EntangledEntertainment (I’ll never do a fixed fight Fador won fair,i have to get my weight down,that loss was on me.. non fighters need to 🤫) much love to my real fans,you win some lose some🤷🏾‍♂️

So, Jackson’s acknowledgment that he wasn’t at his best, fighting at 265, shouldn’t come as a surprise. But to hear that he plans to return to light-heavyweight might raise some eyebrows. After all, Jackson is now 41 years old, so, making the drop back to 205 at this juncture might be tough.

Weight aside, it will be interesting to see who Bellator taps for Jackson’s next opponent, and how many more times the star plans to compete. With the loss on Saturday, Jackson has dropped three of his last four fights. It’s also worth noting that prior to Bellator 237, the last time Jackson had been stopped with strikes was all the way back in 2005. That loss came against “Shogun” Rua at a PRIDE event.