Survivor Series was back, this time with the involvement of NXT. The night was packed with action and now the grades are in.

Following Takeover WarGames, Survivor Series was back and this time with the involvement of NXT. The night was packed with action and now the grades are in. 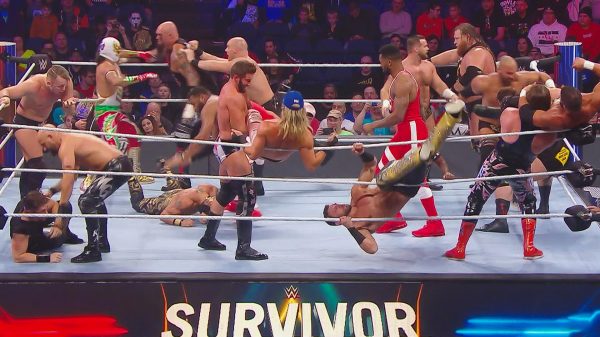 I guess WWE looked at the show felt like a battle royal was needed. At least they made things interesting by adding only tag teams and not jobbers. Dolph Ziggler & Robert Roode got the win in front of about one third of the live audience. Grade: C+

WWE Championship in a No Holds Barred Match: Brock Lesnar vs. Rey Mysterio 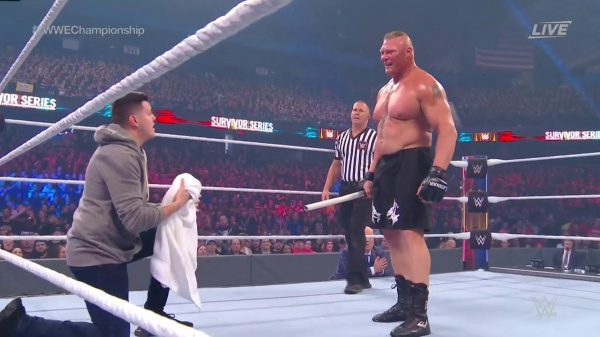 I had trouble taking Rey Mysterio serious in the title match. There could have been several stipulations added and Brock Lesnar would have still left with the title. Mysterio is well past his prime and if he could not beat Lesnar 15 years, 2019 was going to be no different. Lesnar needed a better opponent for one of WWE’s big pay per views. Grade: B- 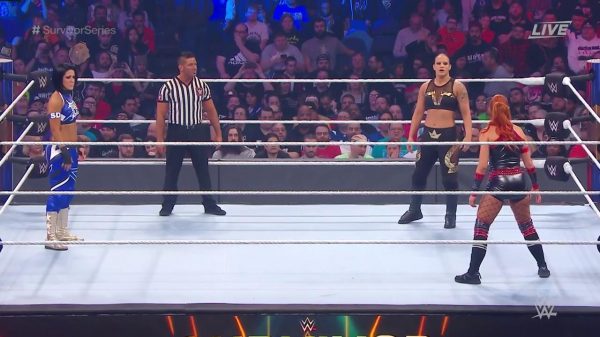 Unless I am wrong, this was the first time female superstars closed Survivor Series. Once we knew this was the main event and there was no CM Punk, you had to think the next logical thing was for Ronda Rousey to appear. The live crowd was not pleased with the triple threat as they let their chants be known. If the match was earlier in the the evening, then fans might have been more accepting. Grade: B- 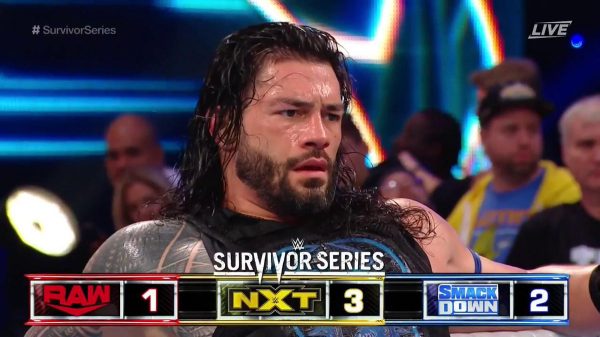 Honestly, the match was so disappointing. Everything felt so rushed and the fans turned once Tommaso Ciampa was eliminated. After WALTER’s early elimination, you knew that WWE did not know how to book these talented 15 superstars. We can see how much the fans now dislike Seth Rollins and they seem to be tired of Roman Reigns as well. If anything, this was the start of Reigns getting back in the Universal Championship picture. Grade: B- 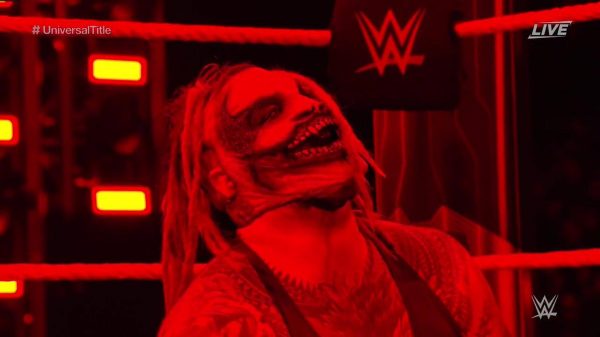 Coming into the match, you had to believe that Daniel Bryan leaving as champion was a long-shot. You have to give Bryan credit as he is the only person that the fans seemed to like opposite Bray Wyatt. It seems like we are starting to see that “The Fiend” is beatable, but there is still a way to go. Grade: B 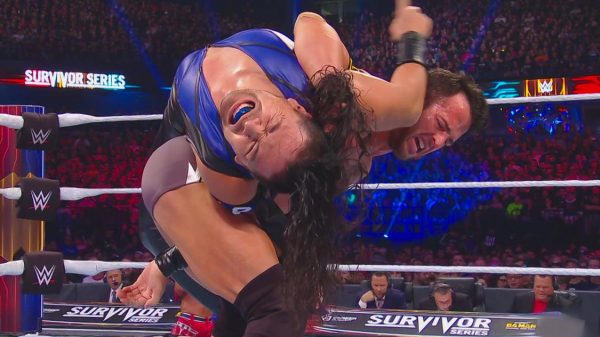 We saw three of the best in WWE battle and they showed their skills inside the ring. It does feel like this match was an afterthought and WWE was focused on other storylines. Grade: B 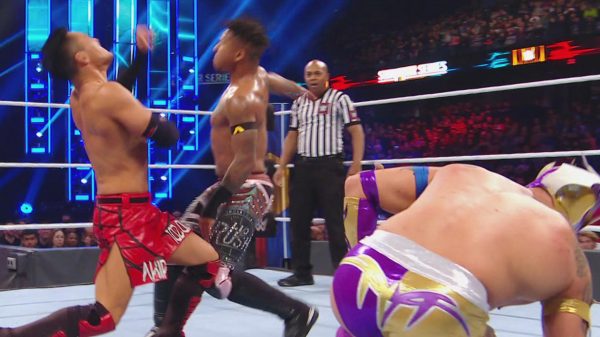 The Cruisereweight Championship had its name tweaked, but they still got stuck on the pre-show. There was some good action, but I would have liked some sort of storyline since all three brands were doing battle. I wish WWE would have kept the title exclusive to NXT and it was defended on the main portion of Takeover. Grade: B 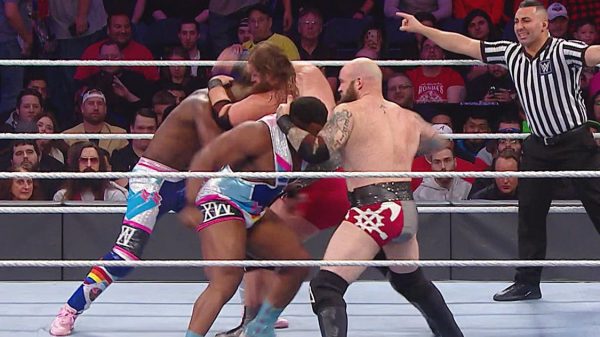 Looking at the match, this belonged on the main card as it featured three of the best tag teams WWE has to offer. There was nothing to dislike in the match as they got the crowd pumped for the long evening to come. Viking Raiders continue to get a massive push on the main roster. Grade: B+

Viking Raiders are awesome so I’m not mad at that. #SurvivorSeries pic.twitter.com/bSWeJSCjCy 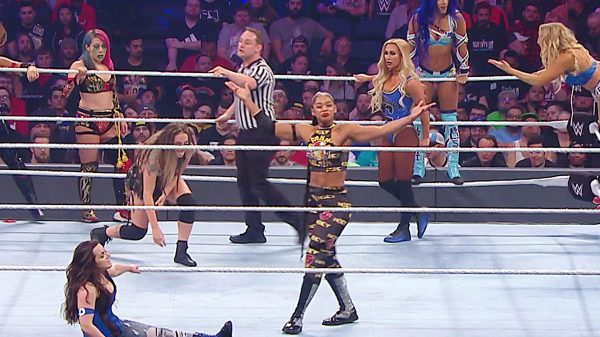 The women stole the show at WarGames, which was tough to do as the card was amazing. When Io Shirai and Candice LeRae headed to the back early, it made me think that NXT was in for a long night. They fought back and eventually got the win as Rhea Ripley’s huge weekend continued. Nothing was rushed here and this is how Survivor Series elimination matches should be booked. Grade: A-

It all comes down to #TheBoss and #TheNightmare.@SashaBanksWWE and @RheaRipley_WWE are going to WAR at #SurvivorSeries! #WWENXT #SmackDown pic.twitter.com/HDD1fRXJew 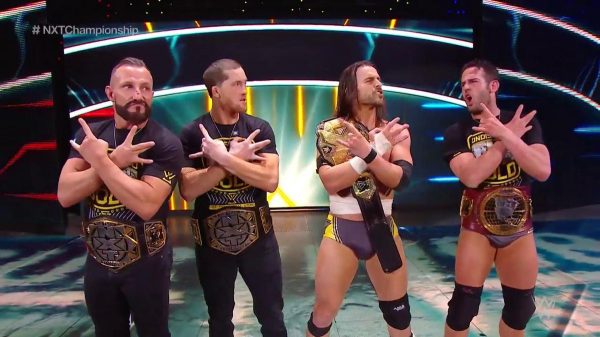 Less than 24 hours earlier, Adam Cole took a ridiculous bump off the top of the steel cage and now he was defending the NXT Championship. Cole kept his impressive November run by getting the better of Pete Dunne. Watching these was like a Takeover match taking place on a grander stage. Great ending sequence. Grade: A-

EXCLUSIVE: After a successful title defense at #SurvivorSeries, #WWENXT Champion @AdamColePro says he has proven to the world why no one is better than him. pic.twitter.com/Mpvn6W2Gcm

Enes Kanter Freedom: The United States Should Not Trade ‘The Merchant Of Death’ For Brittney Griner