The doctor's decision to stop last night's fight between Jorge Masvidal and Nate Diaz didn't go over too well with many in the MMA world. But, after taking a closer look at Diaz afterward, White believes the right call was likely made.

During last night’s UFC 244 broadcast, it was reported that Dana White appeared to be upset with the doctor’s decision to stop the bout following round three. But, after seeing Nate Diaz up close after the thrilling fight. White was more onside with the physician’s call. 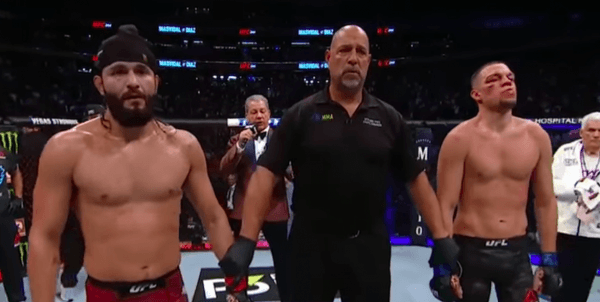 Diaz isn’t allowed to continue into round four

Masvidal tagged Diaz with some heavy shots right out of the gate, and a cut was opened over the right of the latter. Masvidal landed more blows to that side of Diaz’s face in the proceeding rounds, and the Stockton star was bleeding considerably.

While the size of the cut was very apparent by the end of round three, it wasn’t bleeding that much at that juncture. So, when the doctor waved off the fight, boos rang out and outcry online began.

White’s take on the cut

Well, by the time White spoke with the media after the card, he had met with Diaz backstage. While discussing the doctor’s decision to stop the fight, the UFC President said this (quotes via MMA Junkie).

“As I just went back and talked to Nate Diaz and looked at Nate Diaz’s face, his eyebrow is literally flipping over like this,” White said. “And he has another cut right underneath it. The fight probably should have been stopped. Could Nate Diaz keep going? Did Nate Diaz want to keep going? Yes. That’s why we love Nate Diaz. But he probably shouldn’t have.”

“I think doctors know when they see a cut that’s either putting the fighter’s health at risk, meaning he can’t see – which Nate Diaz absolutely, positively could not see out of that eye,” White said. “He kept trying to wipe the blood out.

Some of the feedback online has included the argument other commissions, like say, Nevada’s, would have let the fight continue a bit longer. That’s probably right. If the cut had been bleeding more when the doctor made the call, however, fewer people would probably be upset with the decision.

All this aside, now it remains to be seen if Masvidal and Diaz meet up again down the line. White said, however, that he’s not interested in booking a rematch right away.