It wasn't long ago that Ben Askren's name was being mentioned in title shot conversations. But, following his latest lost at UFC Singapore, the decorated fighter says retirement could be next.

Just four months ago, many believed that Ben Askren could be the next man to challenge UFC welterweight champ, Kamaru Usman. But, fast forward to today, and “Funky’s” reporting that he’s thinking about hanging up the gloves. 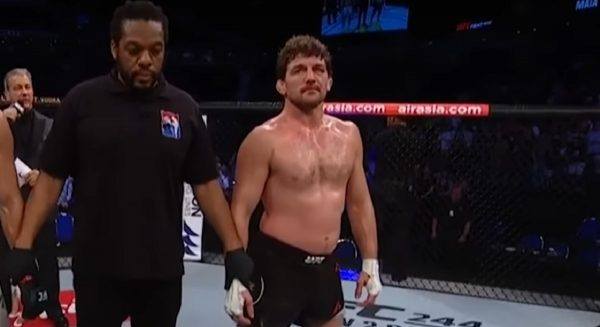 Although Askren’s submission win over Robbie Lawler this past March was highly controversial, it moved the decorated wrestler into a bout with Jorge Masvidal this past July. Leading up to that fight, there was talk that if Askren scored a decisive win, he could be tapped to face Usman next. After all, Askren is a former ONE and Bellator champ, and that point, he had never lost.

Well, as you surely know, Askren was viciously taken out by a Masvidal flying knee at UFC 239 and his record received its first loss. “Funky” was booked to fight Demian Maia this past weekend at UFC Singapore, in a match-up between two of the best grapplers in the game.

Although Askren appeared to win rounds one and two, in round three, he paid dearly for taking Maia down. The feared submission artist reversed positions and choked Askren out with a rear-naked-choke.

Well, following the devastating loss, Askren appeared on Ariel Helwani’s “MMA Show“. While talking about his future, the 35-year-old said this (quotes via MMA Junkie):

“If I beat Demian Maia I’m probably one more good win away from a title shot,” Askren said. “Now I look at my path, and I’m like ‘Oh (expletive).’ I’m kind of far away. Fortunes can change fast, but it’s probably minimum, minimum three fights. It could be upwards of four or five. Who knows? I don’t need to prove I’m a good fighter. I don’t need more money. I don’t need to be more famous. I don’t really want any of those things that badly. What I wanted to do was prove I’m the best in the world, and now I’m looking at how far away that is and how long it’s going to take me to get there and trying to weigh all that out.”

“Retirement is definitely something I am considering,” Askren said. “I would be lying to you if I said I was not. It’s just a time-cost analysis. I have a lot of things to do in my life. I’m a really busy guy. I have a lot of things I’m passionate about, and I love. Not training specifically, but to and from setting stuff up, I’m probably spending about 30 hours a week on MMA related stuff. ‘Can I place my time better somewhere else’ is definitely a thought process that’s crossed my mind.

“That being said, two more things: All I ever wanted was an opportunity. That’s all I ever wanted…Then the other thought process is part of me wants to fight more. I thought I was doing really well in the Demian Maia fight.”

Have we seen the last of Askren in the Octagon? It will be interesting to see what happens. While he outlined why he doesn’t need to fight anymore, you have to wonder if he’ll feel compelled to record at least, one, clear cut win under the UFC banner? In an effort to silence some of his critics?